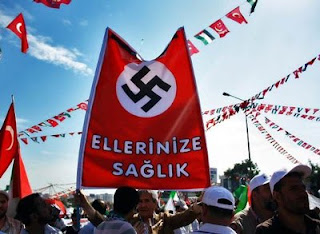 Pro-Hamas Rally in Turkey
(Ellerinize Saglik is a common expression of gratitude).

In an earlier posting I quoted from a two-part National Review Online article by David Horowitz and David Laksin: They wrote that the world:

. . . is witnessing a reprise of the 1930s, when the Nazis devised a “final solution” to the “Jewish problem,” and the civilized world did nothing to halt its implementation. This time, the solution is being proposed openly in front of the entire international community, which appears unruffled by the prospect. It has turned its collective back on the Jews, and refuses to recognize the gravity of the threat.

This trend will almost certainly end in a catastrophe.  I urge those who have the patience to read the entire piece. It ends with this lament:

During the year and a half Obama has been in office, he has indeed brought change to America and to the world. He has transformed a nation that had been the world’s bulwark of democracy and freedom into an enabler of the very forces that are intent on destroying them. He has helped to isolate America’s only ally in the Middle East, its sole democracy and most vulnerable people. And he has brought the impending war of annihilation against the “crusaders” and the Jews, which the jihadists have promised, measurably closer to its nightmare fruition.

If that seems an overstatement, I urge my friends to read the entire piece. Part I is here, and Part II here. As I'm sure you will, feel free to respond in this space as you see fit.
Photo from Religion of Peace.

Greetings,
A compelling article. I'm still reading through it but the answer to the expanding settlements being that East Jerusalem is the Israeli capitol is claiming something that is questionable. Is the place in question mostly Jewish because everyone else was driven out?

Even if that is left aside: what would you have us do? Simply rubber-stamp anything the Israeli army does? Would this extend to their allies? I'm thinking primarily of Sabra and Chatila (sp?).

Should we join in another elective war? Iran is too large for us to try and conquer. We could damage their infrastructure but that would only strengthen the hand of the clerics.

It seems rubber-stamping Israeli actions and sabre rattling has done nothing to make things better. Why not try a more diplomatic approach? We are hip deep in Iraq, now run by allies of Iran. That didn't work so well.

And I note that the article from NRO conveniently omits that the mullahs came to power after running out our blood soaked dictator, the Shah. We are not as a nation nearly as innocent as this article would have it.