I recently pulled one of Hans Urs von Balthasar's books off the shelf to get the citation for a quote I had taken from the book. It was Vol. I of Theo-Drama as it happens. The cover of the book dropped open revealing Liz's signature, for the book was as gift from her. I am in my little cottage in the country at the moment, and there is no one here with whom to share it, so I decided to share it with whomever might pass this way, as apparently you just did. All the better if the visitor knew Liz, who was and is the light of my life. 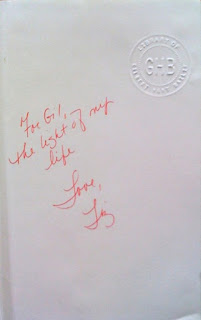 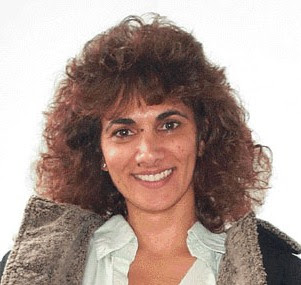 Liz's inscription in the book she gave me is a typical example of her elegant penmanship. The brain tumor that took her life was in the area of brain controlling language. So as the tumor progressed, Liz lost the ability to speak and to write.

Just as I was surprised to stumble upon the inscription in the book, so a few weeks after Liz's death I found a scrap of paper on which she had scribbled what were very likely the last words she ever wrote. They were from the heart of a woman for whom the Eucharist was the source and center of her life. 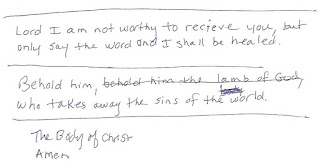 These are blessings for which I am immeasurably thankful this Thanksgiving, as I am for all the incomparable blessings I receive from my children and grandchildren and friends.

The loser when the game of dice is done
Remains behind reviewing every roll
Sadly and sadly wiser and alone
The crowd leaves with the winner . . .
Purgatorio, Canto VI: 1-4

Osama bin Laden: "When people see a strong horse and a weak horse, by nature they will like the strong horse."

Some will. Some won't. 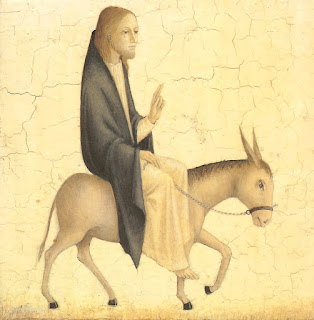 I had hoped to believe at least for a while that things are not as bad as I had predicted in my earlier posts they would be, but alas the news is already coming in, suggesting that the political tsunami is on its way.

This from my friend Mark Gordon:

"Last night, while standing just a few feet from the podium from which our next pro-choice president spoke, I was overcome with pride and emotion. Would it have been possible to react in any other way? I was so proud of what pro-choice America did to make this historic moment possible and I knew in that moment that the electricity I felt in this crowd in Chicago was being felt across the country."

Read it all here.

The fact that the president of NARAL Pro-Choice America was standing a few feet from the podium at which president-elect Obama gave his victory oration says all that needs to be said about how deadly serious he was when he declared: "I will not yield and Planned Parenthood will not yield."

And then this from Piero Tozzi at C-FAM:

Koh is perceived as championing abortion and homosexual rights, pointing to developments in other jurisdictions as indicating a shift in world opinion that should be reflected in constitutional law. This past October, he chaired a panel discussion on “Transnational Perspectives on Sexual and Reproductive Rights” at a Yale conference which predicted “dramatic changes in the near future” in Supreme Court jurisprudence in these areas.

Read it all here.

It looks for all the world as though the grim predictions were not exaggerated. How I wish they were.

I am in Wheaton, Illinois in the western suburbs of Chicago. I had lunch today with a friend who is also a member of the Cornerstone Forum board of directors. He has just returned from a trip to the Congo, where he and a few others are helping to build a school in a very poor and very remote Congolese village. What he saw in the Congo, especially in the cities, was grinding poverty, despair, political corruption, and epidemic violence -- a vast country that appears to western eyes to be ungovernable.

Meanwhile in this country, following one of the most contentious elections in recent history, both the losing candidate and the outgoing president extended their congratulations to the president-elect and wished him well in the most heartfelt and sincere way, as he prepared to assume one of the most difficult jobs in the world under some of the most difficult circumstances. What a luxury it is to live in a society where the transition of political leadership -- even after a very divisive and hard fought campaign -- is accompanied by this kind of spirit.

I have made my reservations known about the president-elect's policies regarding the lives of the unborn, the sanctity of traditional marriage, embryo-destructive medical research and similar issues, and I retract none of my concerns, based as they are on explicit commitments he has made to some of his most fervent supporters. That said, however, I share with others a pride in the historic fact that our next president represents a milestone in our long journey away from the racial divisions that have so plagued our nation.

I will be praying for our new president, and I urge you to do so as well. I would like nothing more than to be able to say four years from now that my misgivings about his moral philosophy and political agenda were mistaken. Humble pie is a staple of the Christian diet, and I have had enough helpings of it in my life to have acquired a certain perverse taste for it.

Whatever policies emerge from the new administration, however, the erosion of our culture's moral and religious underpinnings proceeds apace, and we will continue to do our small part in the effort to reverse that trend.
Posted by Gil Bailie at 2:50 PM No comments: