from the Archives: The Trinity - Part 4

Separating the wheat from the chaff.... 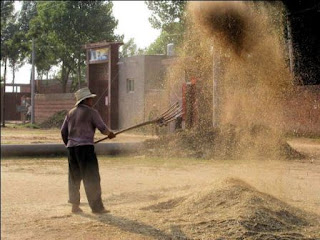 Posted by Randy Coleman-Riese at 1:13 AM No comments: Links to this post

from the Archives: The Trinity - Part 3

Troy, yet upon his basis, had been down,
And the great Hector's sword had lack'd a master,
But for these instances:
The specialty of rule hath been neglected;
And look how many Grecian tents do stand
Hollow upon this plain...[
] O, when degree is shak'd,
Which is the ladder of all high designs,
The enterprise is sick! How could communities.[
] But by degree, stand in authentic place?
Take but degree away, untune that string,
And hark what discord follows! Each thing meets
In mere oppugnancy: the bounded waters
Should lift their bosoms higher than the shores,
And make a sop of all this solid globe;
Strength should be lord of imbecility,
And the rude son should strike his father dead;
Force should be right; or, rather, right and wrong,
Between whose endless jar justice resides,
Should lose their names, and so should justice too.
Then everything includes itself in power,
Power into will, will into appetite;
And appetite, an universal wolf,
So doubly seconded with will and power,
Must make perforce an universal prey,
And last eat up himself. Great Agamemnon,
This chaos, when degree is suffocate,
Follows the choking.
And this neglection of degree it is
That by a pace goes backward, with a purpose
It hath to climb. The general's disdain'd
By him one step below, he by the next,
That next by him beneath; so ever step,
Exampl'd by the first pace that is sick
Of his superior, grows to an envious fever
Of pale and bloodless emulation.
And 'tis this fever that keeps Troy on foot,
Not her own sinews. To end a tale of length,
Troy in our weakness stands, not in her strength.

Posted by Randy Coleman-Riese at 1:41 AM No comments: Links to this post

Writing from the Fellowship of Catholic Scholars conference in Baltimore, which is a wonderful gathering. I caught a glimpse of Mark Steyn this a.m. Here's what he had to say:


Take this no-name pastor from an obscure church who was threatening to burn the Koran. He didn’t burn any buildings or women and children. He didn’t even burn a book. He hadn’t actually laid a finger on a Koran, and yet the mere suggestion that he might do so prompted the President of the United States to denounce him, and the Secretary of State, and the commander of US forces in Afghanistan, various G7 leaders, and golly, even Angelina Jolie. President Obama has never said a word about honor killings of Muslim women. Secretary Clinton has never said a word about female genital mutilation. General Petraeus has never said a word about the rampant buggery of pre-pubescent boys by Pushtun men in Kandahar. But let an obscure man in Florida so much as raise the possibility that he might disrespect a book – an inanimate object – and the most powerful figures in the western world feel they have to weigh in. . . .

When someone destroys a bible, US government officials don’t line up to attack him. President Obama bowed lower than a fawning maitre d’ before the King of Saudi Arabia, a man whose regime destroys bibles as a matter of state policy, and a man whose depraved religious police forces schoolgirls fleeing from a burning building back into the flames to die because they’d committed the sin of trying to escape without wearing their head scarves. If you show a representation of Mohammed, European commissioners and foreign ministers line up to denounce you. If you show a representation of Jesus Christ immersed in your own urine, you get a government grant for producing a widely admired work of art. Likewise, if you write a play about Jesus having gay sex with Judas Iscariot.

So just to clarify the ground rules, if you insult Christ, the media report the issue as freedom of expression: A healthy society has to have bold, brave, transgressive artists willing to question and challenge our assumptions, etc. But, if it’s Mohammed, the issue is no longer freedom of expression but the need for "respect" and "sensitivity" toward Islam, and all those bold brave transgressive artists don’t have a thing to say about it.

Steyn's anti-sentimentalizing is at its best here, not all as quotable in public as the above.
Posted by Gil Bailie at 10:21 AM 2 comments: Links to this post

from the Audio Archives: The Trinity - Part 2

In the 1985 movie "Back to the Future" the character George McFly introduces himself to his future wife, Elaine, by saying, "I am your density..."

In the excerpt below Gil Bailie, in his approach to a discussion of the Trinity, explores 'ontological density' and its fracturing in the modern world in the midst of what Rene Girard calls a crisis of distinctions.

Posted by Randy Coleman-Riese at 1:42 AM No comments: Links to this post

Today I am posting an excerpt from the beginning of a series of recordings Gil Bailie made in 1994 entitled, The Trinity. In a couple of quotes from theologians Gil offers a preamble to this discussion:

The more one reflects on the mystery of the trinity the farther one seems to move from any final understanding of it. What was closed opens up, what was once understood becomes unclear. Again and again one must begin anew. Consequently, the doctrine of the trinity remains unfinished. For those confronted by it, it is an unending process of learning and suffering. By the same token however, one cannot give it up, one is never free from it. For the theologian, an understanding of the trinity is the highest and certainly the most humbling task he faces. - Jurgen Multmann

Only with the doctrine of the trinity is the historical truth of the cross given theological illumination. - Norbert Hoffman

Gil notes that the reverse of Hoffman's thought is also true; with the help of Girard's anthropological prespective, the historical truth of Christ's crucifixion on the cross allows us to see the practical implications of the doctrine of the Trinity in a new and profound way.

Posted by Randy Coleman-Riese at 11:33 AM No comments: Links to this post

In one of my first posts on Gil's blog some months ago I posted an audio recording from 2o02 of Gil Bailie introducing Rene Girard with a story from G. K. Chesterton about a 'white haired, absent minded old professor who is dragged from his laboratory to analyze an airplane with a serious indispostion'. This recording was made only a few days after the 1st anniversary of the September 11th terrorist attacks. So, when Gil mentions "airplanes crashing not from mechanical causes but from human calculation" the resonance was deep and clear.
On this 9th anniversary of the attacks I thought it would be profitable to hear this again and think of all the analysis that has been brought to bear on these events from every academic discipline and ideological perspective over the past years. Perhaps we need to hear again Prof. Girard's appeal to the truth of human relations based as he sees it on mimetic phenomena.
Note: Prof. Girard in his comments makes reference to an earlier metaphor used by Gil about a painting depicting Galileo inviting Catholic bishops to look through his telescope.

Posted by Randy Coleman-Riese at 12:19 PM No comments: Links to this post

The Cornerstone Forum is introducing a new phase in our mission of bringing a wholehearted faith to a half-hearted world. The Scriptorium. We encourage you to look at the short 8 minute video below and even more to read or listen to Gil's in depth overview of this new project by visiting our NEW SITE. (You will need to log in to our new 'Friends of the Cornerstone Forum' site - please enter USERNAME: cf_friend PASSWORD: cf

Posted by Randy Coleman-Riese at 8:00 AM No comments: Links to this post

From the Archives: Famished Craving pt 8

With this post our audio player is now able to be accessed on Apple iPhones, iPods, and iPads.
If anyone has difficulty playing these please let us know by leaving a comment. Thank you.

Here's my son-in-law, Mike, on his way home from the hospital. Happy to be a new Dad
Posted by Gil Bailie at 1:47 PM No comments: Links to this post

From the Archives: Famished Craving pt 7

just as the death of the sacred king, or the repetition of a sacred ritual was often accompanied by crisis so in the modern world the waning of the power of the sacred has precipitated a crisis

Posted by Randy Coleman-Riese at 2:00 AM No comments: Links to this post