from the Archives: The Trinity - Part 14

Posted by Randy Coleman-Riese at 4:02 PM No comments:

from the Archives: The Trinity - Part 13

Posted by Randy Coleman-Riese at 9:26 PM No comments:

from the Archives: The Trinity - Part 12

There is always a Father toward whom we are being lead, a lord beckoning us , and a spirit leading us. The question is who are they?

Posted by Randy Coleman-Riese at 1:20 AM No comments:

from the Archives: The Trinity - Part 11

You who question souls, and you to whom souls must answer,
do not cut off the soul of my son on my account. Let the strength
of his childhood lead him to you, and the joy of his body stand
him upright in your eyes. May he discern my prayer for him, and
to whom it is uttered, and in what shame. I received the living
waters and I held them in a stagnant pool. I was taught but Idid
not teach. I was loved but Idid not love. I weakened the name that
spoke me, and I chased the light with my own understanding.
Whisper in his ear. Direct him to a place of learning. Illuminate
his child’s belief in mightiness. Rescue him from those who want
him with no soul, who have their channels in the bedrooms of the
rich and poor, to draw the children into death. Let him see me
coming back. Allow us to bring forth oursouls together to make a
place for your name. If I am too late, redeem my yearning in his
heart, bless him with a soul that remembers you, that he may
uncover it with careful husbandry They who wish to devour him
have grown powerful on my idleness. They have a number for
him, and a chain. Let him see them withered in the light of your
name. Let him see their dead kingdom from the mountain of
your word. Stand him up upon his soul, bless him with the truth
of manhood.

Leonard Cohen
Posted by Randy Coleman-Riese at 1:19 AM 1 comment:

from the Archives: The Trinity - Part 10

Catharsis – the warm up act for the Dionysian crescendo

from the Archives: The Trinity - Part 9 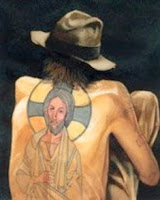 Note: In this and the next post Gil refers to disturbing stories from popular culture. Some listeners may be scandalized by them. However, his motive is not to shock the listener into 'tsk, tsking' the depravity of elements of modern culture but rather to give current living examples of the effects of the Gospel's work in history as it undermines the old sacred system. And to the extent the old patriarchal structures were supported by that system the resulting dissolution of the notion of the 'father' with its symptoms of fatherlessness is the anthropological datum for the assessment of the ongoing cultural crisis brought on by the revelation of the cross of Christ. So important is the understanding or appreciation of what is ‘the father’ that when it is abandoned we become like lost children.

Many if not most people will it find it difficult to discern the relationship between the failure to appreciate the centrality of the Trinity and these phenomena. Just as René Girard says of the Cross, that there are countless ways to misinterpret what happened, but only one way to get it right, which is the Christian way. So it is with the Trinity. The Cross is the Trinity viewed from the ‘this worldly’ perspective of the profound depths of self-donating love of the Son. “Father, into your hands I commit my spirit…”

Posted by Randy Coleman-Riese at 2:35 AM No comments:

from the Archives: The Trinity - Part 8

If the old patriarchal system has been decisively undermined, is there a basis for the renewal of the role of the father in both family and religious and cultural life?

Posted by Randy Coleman-Riese at 2:13 AM No comments:

As I begin to dust off my modest writing skills, I have come quickly to realize how predisposed I am to long, rambling sentences, written in the forlorn hope of saying just a little bit about just about everything before being obliged to type a period and abandon the effort. Ah, but this sort of wan hope is revived on occasion by reading similarly ambitious sentences by one's literary and theological betters, sentences which come so close to achieving the elusive goal as to make it seem possible; the sentences below, for instance, from the pen of Joseph Cardinal Ratzinger (Pope Benedict XVI), the Jamesian complexity and theological profundity of which are matched by their immense contemporary relevance.


The Christian faith, which carries within itself the great heritage of the religions and which opens up this heritage to the Logos, to true reason, could offer a new basis to them at the deepest level and could at the same time make possible a real synthesis of technological rationality and religion, something that can only come about, not by a flight into the irrational, but by opening up reason to its true height and breadth. Herein lie the great tasks of our contemporary historical moment. Christian mission will doubtless have to understand other religions far more profoundly and accept them at a deeper level than has been the case hitherto, but these religions, on the other hand, in order for their best elements to survive, need to recognize their own adventual character, the way they point forward to Christ. If in this sense we proceed on an intercultural search for traces of a path toward a common truth, then something unexpected will appear: Christianity has more in common with the ancient cultures of mankind than with the relativistic and rationalistic world that has cut loose from the fundamental insights of mankind and is thus leading man into a vacuum, devoid of meaning. (Truth and Tolerance, 78-79)

I want to write like that! Don't hold your breath; just keep me in your prayers.

But let me add this. Jesus made it clear that the Gospel will scandalize, all the more reason not to compound that real scandal with any unnecessary and extraneous ones. But the real scandal of the Gospel is the one to which Cardinal Ratzinger has eluded here, and, however, shocking it is to contemporary sensibilities, it is precisely this scandal -- that Christianity is the truth toward which all that is healthy and emancipating in the great religious traditions are moving -- this scandal, the scandal of particularity -- is the one that is so powerfully corroborated by the work of René Girard.

"Christianity," Cardinal Ratzinger wrote, "has more in common with the ancient cultures of mankind than with the relativistic and rationalistic world that has cut loose from the fundamental insights of mankind and is thus leading man into a vacuum, devoid of meaning." To which Girard would simply say amen.
Posted by Gil Bailie at 3:16 PM No comments:

from the Archives: The Trinity - Part 7

Poet and sculptor, do the work,
Nor let the modish painter shirk
What his great forefathers did,
Bring the soul of man to God

Under Ben Bulben - W. B. Yeats

Posted by Randy Coleman-Riese at 1:22 AM No comments:

RIYADH, Saudi Arabia - Saudi police raided a secret Catholic mass in Riyadh last week and arrested a dozen Filipinos and a Catholic priest, charging them with prosyletising, a local daily reported on Wednesday.

The raid took place as some 150 Filipinos were attending the mass in a Riyadh rest house on Friday, the second day of the weekend in Saudi Arabia, Arab News said. ...

Saudi Arabia bans the practice of any religion aside from Islam. However, small, low-key prayer services inside expatriate compounds and in Filipino gatherings are tolerated by officials. 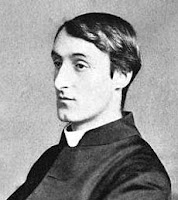 
When a man has given himself to God’s service, when he has denied himself and followed Christ, he has fitted himself to receive and does receive from God a special guidance, a more particular providence. This guidance is conveyed partly by the action of other men, as his appointed superiors, and partly by direct lights and inspiration. If I wait for such guidance, through whatever channel conveyed, about anything, about my poetry for instance, I do more wisely in every way than if I try to serve my own seeming interests in the matter. … And if [he Lord] chooses to avail himself of what I leave at his disposal he can do so with a felicity and with a success which I could never command. And if he does not, then two things follow; one that the reward I shall nevertheless receive from him will be all the greater; the other that then I shall know how much a thing contrary to his will and even to my own interests I should have done if I had taken things into my own hands ...


This is my principle and this in the main has been my practice: leading the sort of life I do here it seems easy, but when one mixes with the world and meets on every side its secret solicitations, to live by faith is harder, is very hard; nevertheless by God’s help I shall always do so.

Good advice.
Posted by Gil Bailie at 12:10 PM No comments:

from the Archives: The Trinity - Part 6

If patriarchal cultural arrangements prove themselves to be convenient host environments for the old sacred system, fatherlessness and the patriphobia of radical feminists and rock music nihilists function just as readily as self legitimizing, politically correct costumes for causing another generation to prostrate themselves before the ruler of this world, the father of lies.

Posted by Randy Coleman-Riese at 1:16 AM No comments:

from the Archives: The Trinity - Part 5

Patriarchal Structures of Oppression: The Father

John W. Dixon: “Christians stubbornly clung to their language even when it could be said they didn't really understand it.”

Posted by Randy Coleman-Riese at 1:15 AM No comments: