If post-partisan doesn't appeal how about post-presidential? 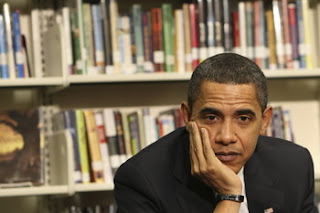 Peggy Noonan's column in yesterday's Wall Street Journal Online began with her musings on president Obama's remark to Diane Sawyer about the possibility that he might be a one-term president. The Noonan piece began this way:


There is, I think, an amazing political fact right now that is hiding in plain sight and is rich with implications. It was there in President Obama's Jan. 25, pre-State of the Union interview with ABC's Diane Sawyer, who was pressing him about his political predicaments. "I'd rather be a really good one-term president than a mediocre two-term president," he said. "And I—and I believe that."

Now this is the sort of thing presidents say, and often believe they believe, but at the end of the day they all want two terms. Except that Mr. Obama shows every sign of meaning it, and if he does, it explains a lot about his recent decisions and actions.

Noonan went on to suggest that Obama's reluctance to move to the center -- even if that were the only way to save his presidency -- was due to his deep and abiding belief in the far left agenda the nature of which he has only slightly managed to camouflage from the American people. But another explanation occurs to me, albeit one that amounts to psychologizing the president.

I think Mr. Obama is, as many have suggested, a narcissist, and I don't mean that in as disparaging a sense as it must seem. I have always had grave reservations about Barack Obama's political views and his honesty, but when I say he's a narcissist what I mean is that he thrives on the rock-star aspect of election campaigns, where (especially with the help of a teleprompter and Chicago-style backroom political hardballers) he can turn mellifluous  phrases and appeal to the collectively primed emotions of his (often self-selected) audiences, reveling in the applause and acclaim.

Compared to this, governing; dealing with legislative and administrative details, conferring with political leaders in working sessions, and all the horrendously difficult and humdrum reality of effective governance . . . compared to the glories of campaigning, governing is, for someone addicted as I think Mr. Obama is to the roar of the crowd, simply boring. I think the job of being president, compared to the joy of running for president, is losing interest for him. So when he speaks of the possibility of being a one-term president, I think he might rather look forward to joining Bill Clinton and Jimmy Carter as a life-long free-agent celebrity. He may well muse -- and probably rightly so -- that in the days ahead his star status will be vastly greater than the other former Democratic presidents.

There is a reason why Mr. Obama has given vastly more speeches in his first year of office than any two-term president has ever given in eight years. (Correct me if I'm wrong about that.) The reason is, as he rather immodestly said about his famous address at the 2004 Democratic National Convention: in his own estimation at least, he's good at it. Why not long for a life of what you're good at, uninconvenienced by the tedium of having the face a dozen intractable problems every day.
Posted by Gil Bailie at 4:09 AM

Let it be so. One can only hope that he so prefers the role of the ideologically pure post-presidential “prophet” -- with the added perks of a $500,000 speaking fee and library built to reflect his glory -- that he stays willingly mired in irrelevance for the balance of his term. Then he can spend the rest of his life speaking to a room that adores him as that “rock star” of truth who was just too far ahead of his time for common people to recognize it (Perhaps the same room where “the women come and go, talking of Michelangelo”).

But what happens this year, when this man who needs adulation can’t escape the reality that the people not only reject his ideas, they also, in the face of his invincible condescension, reject him personally? Will he become depressed and erratic? Or maybe his present insistence that Obamacare is unpopular because he simply hasn’t talked enough portends three years of daily speeches, and that January 20, 2013 will just be known as the day the unplugged the teleprompter?

What's really bizarre about this statement is that he fails to contemplate a third possibility, which is that he could simply be a mediocre one-term president! How many "really good" one-term Presidents have there been? I can't think of any, for the simple fact that Presidents who have a "really-good" first term tend to get re-elected to a second term. The idea of a "really-good" one-term President is almost a contradiction in terms. By failing to either run for re-election or actually to get re-elected, one has necessarily must have had a less than stellar first term.