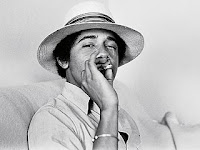 Dr. John C. Drew knew Barack Obama during his college days at Occidental College. What he has to say is I think important. Not that many don't have opinions in our youths that change later, but in this case the ideological fixation seems to be such that it still has pertinence. If there were no William Ayers and Rev. Jeremiah Wright in Mr. Obama's later years, Dr. Drew's story could be ignored more easily.

I think this story "has legs" as they say, and it is partly because if you listen to Dr. Drew I think you will think, as I did, that he seems a very soft-spoken and level-headed man. He has obviously wanted to tell this story for sometime, but he seems very credible. What he has to say might mean for the country today is what people will have to figure out for themselves.