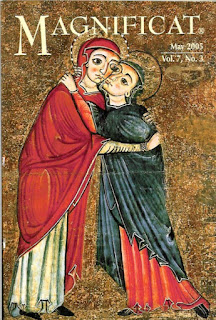 I warned in my last post to this weblog that my postings in the period just ahead would be part of a gradual Lenten transition, as my heartache over the loss of my wife and dearest friend is transfigured into what I hope will eventually be a rekindled effort on behalf of the faith that was at the heart of the love that we shared. After uploading the last post, I read a letter I received yesterday from a cloistered Benedictine nun now living in an abbey in England who has been one of Liz's most important spiritual confidantes for fifteen years or so. I want to share something of what she wrote. (I needn't mention her name out of respect her confidentiality.) Early in her rather lengthy letter, she says something that has very much been my experience over the last two weeks. She writes:

When a loved one dies, sometimes those who remain behind are granted a deeper, clearer, almost transfigured sense of who that person really is. It is as though simultaneous with the wail of grief is another song -- which will not be silenced -- of purest joy. This, it seems to me, is the work of the Comforter, revealing to us as much as we can bear of the Epiphany that the deceased one is experiencing in its fullness in the life to come.

This marvelous woman was someone on whom Liz would occasionally call for wisdom and counsel. On one of our trips to Europe, Liz was once able to visit her at her abbey in the English countryside. Before and after that visit they periodically spoke by telephone. The morning after Liz's death, I called to break the news to her. She had know, of course, of Liz's grave illness, but since Liz went out of her way to reassure everyone about her condition, the news came as a shock to her. This wonderful Benedictine sister lives without email and the internet, and so had no way of knowing what I had said at Liz's funeral Mass two days before she composed this letter, but what she writes echoes my remarks perfectly.

Your call came between 2:30 and 3:00 p.m.; from that time until Vespers I was more "with her" than with myself, as Elizabeth, in all her uniqueness and giftedness, blossomed before my mind’s eye. I remembered the first time I met her, her striking beauty coupled with her gentleness and sweetness. I thought of the various times, as I came to know her better, when I grasped the critical features of her personal history. ... I thought of the period of time when she lived under private vows, and when she later came to question them. Through all these stages there was a steady growth in her spiritual life. And then, a new epoch arrived in the form of one Gil Bailie, and she discovered, to her surprise, a vocation to marriage. During this last period, I saw her reach a level of spiritual maturity that few attain. In her last letters to me I saw that she had become what I call an "ecclesial woman" -- by which I mean, someone who had grasped the true nature of the Church as the life-giving Body of Christ, who espoused that reality fully and gratefully, who defended it to those who attacked it, who shared it with those who loved it, and who gave her own life back to it in sacrifice with an urgency and -- amazingly, under the circumstances -- with a joy that can only have come from her union with Christ Himself. ... Her entire life, from its first moment to the last, was profoundly signed by the Cross. I can only thank God that she herself came to discover -- long before I even met her -- that in the Cross she would find her Life and the Person who loved and saved her.

Among many of my bitter-sweet chores at the moment is one that has all the gravity of decisions destined to be "carved in stone." I am ordering the gravestone that will mark Liz's final resting place and mine. I have chosen an image of the Eucharist and an inscription from the third Eucharist prayer in the Catholic Sacramentary: "May He make us an everlasting gift to You." All this unbeknownst to Liz's Benedictine friend, who nevertheless writes:

From the time I met her, in about 1993, her life was one of striving with all her might to bring herself to the light and receive God into herself. No wonder the Eucharist became everything for her during her last two years. In the end, she herself became Eucharistic as she strove to offer herself back to God, to offer her sufferings in sacrifice for the Church.

Finally, in concluding her lovely letter, this thoughtful and prayerful woman shared this:

Another revelation. I am not ordinarily given to premonitions -- or, at any rate, I am not inclined to trust them. I knew, however, that when Elizabeth entered the vocation of marriage, it would mean an intensification of the experience of the Cross for you both. And I knew it not in a vague way, but specifically: that the marriage would not be a long one because one of you would be taken from this life. This is not something I wanted to share with Elizabeth, for obvious reasons. Nor, as I say, is it something that I fully accepted. I pushed it away from my mind. But now that it has come to pass, I bring it up only as a way of affirming that your loss of Elizabeth really is encompassed within the mysterious providence of the Father for you.

The traditional wedding vow pledges the man and woman to one another "until death do you part." Liz and I understood from the beginning, long before her illness, that death would fail to part us, that our marriage was "encompassed within the mysterious providence of the Father." What other crosses or joys might be encompassed therein remains to be seen, but the means by which we are "encompassed within the mysterious providence of the Father," as Liz knew so well, is simply: Christ. A love that passes through Christ passes through death, robbing death of most, but by no means all, of its sting.

Who will separate us from the love of Christ? Will hardship, or distress, or persecution, or famine, or nakedness, or peril, or sword? As it is written, "For your sake we are being killed all day long; we are accounted as sheep to be slaughtered." No, in all these things we are more than conquerors through him who loved us. For I am convinced that neither death, nor life, nor angels, nor rulers, nor things present, nor things to come, nor powers, nor height, nor depth, nor anything else in all creation, will be able to separate us from the love of God in Christ Jesus our Lord. (Romans 8:35-39)