As I said in earlier posts, for the time being my "reflections," such as they are, on "faith and culture" will (for the most part) take the form of reminiscences about Liz. This is not only a concession to my inability to give thought to much else right now. It is also apropos in that faith enriches culture one relationship at a time, and it is those like Liz who give Christian faith a loving face who are quietly and unobtrusively Christianizing those they meet and the world around them. 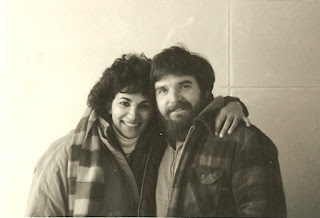 Liz and her friend Michael Boover in the 1970s

In my reflections at Liz's funeral Mass I mentioned her friend Michael Boover, from whom she learned about the Trappist Abbey which was to become her spiritual home. Michael now teaches at Anna Maria College, and he and his wife Diane have been involved in peace and social justice activities all their lives. In a beautiful and moving piece Michael wrote for the Annunciation House Bulletin, he described Liz as "the best of spiritual friends a spiritual friend could have."

Here are a few excerpts from Michael's wonderful memorial to Liz:

I first met Liz in the early to mid-seventies. I was hitchhiking from the Mustard Seed Catholic Worker to the State College to the best of my recollection. My recollections are not in the “best” category much these days. But more to the point than the actual facts is the signal fact that Liz picked me up that day.

Upon hopping into the car, I noticed that Liz had one of Thomas Merton’s books on the seat. “Oh, so you’re reading Merton, are you?” This was immediately met with an intense and near instant rejoinder: “You know about Thomas Merton…?” It was as if centuries of separation and sad solitude suddenly evaporated into mid-air. Could it be that another young soul on the planet actually shared her enthusiasm for Merton, for a Catholic vision of things, for some of her spiritual interests? Could what seemed so highly unlikely really be possible?

“Oh, yeah, I like Merton too.” That was a reply to a question that really meant something. It would lead us to each other over the years and our sharing led her to venture out to Saint Joseph’s Abbey in Spencer in due time. I count that moment as the beginning of a spiritual friendship which is, albeit mysteriously, one of the most intimate spiritual relationships I have ever had. Liz has been helping me travel ever since she stopped for me that day.

Liz loved me with a love akin to what Theresa of Avila must have had for her John of the Cross- the spiritual was key to a relation such as this. All hinged on it. We were really young seekers then, but did share spiritual hungers and inklings that were genuine, if immature. Liz, however, was way ahead of the game. She knew how to pray. I was more the activist but became forever “tied to the feather” of her mystic flights. I wonder if Liz might have spotted me earlier at a Mass at Saint Paul’s Cathedral which may have contributed to her decision to stop for me. I do not know for sure, but over the decade (the seventies), we often seemed to be the only two worshippers under 60 at the 12:10 Mass in the grand cathedral! We may have been that before we actually met and we were definitely that following our initial meetings.

Liz would come to visit from time to time at the hospitality house on Piedmont Street and we would talk about life and faith. Liz was concerned about and caring for her mother and keeping an eye on her younger brother. ...

Liz from about this time

Liz brightened our house with herself in those visits. I also think she found some comfort and kindred in us. We sensed that she was what we call “called.” Liz was holy. This we knew. And while we knew we were on similar journeys, Liz was special. She was definite kin, but not for the “rough and tumble” life we knew day in and out. But sometimes she would write me a note or a letter which described our relationship in Christ with the clarity of a thunderbolt. She got it, had it way before the rest of us woke up to it. We were much more slowly and painfully progressing in “the school of hard knocks”- “upside of the head” version. Liz had already surrendered much, had a peace about her. ...

Liz had longed for an elusive communion in this life which I knew she hoped for without an answer for many years. She was happy with God but needed what had been humanly missing. A human touchstone to God she found and delighted in at long last in her marriage. With her husband, Gil, she could and would be a contemplative and be married too. This could work and we saw that it could. Later, she learned she could be close to her beloved monastery, choosing life in her own self and semi-cloistered country home on a hill proximate to the Abbey. ...

Gil’s thought captured her maturing theological imagination, one already rooted in deep experiential prayer. ... And all that prayer and experience and loneliness eventually sent her Godward in a new way- Gilward if you will. She had independently become a local evangelist for the Giradian-interpreted Christian ethos espoused by Gil and then finally went on a retreat to meet him.

Gil relayed to me a bit of the quandary they both faced on that retreat, "What do you do when and angel sits across from you?” You fall in love. I am so saddened that their physical marriage, their life together on this shore, was so short. I know it was beautiful. But such beauty deserves time. Liz’ death is yet another encounter with the “cross” of Christ both of them knew and celebrated as pivotal to the Christian revelation. This is not the end, but crucifixion is hard under any and all circumstances and seasons.

I am grateful indeed for Michael's beautiful tribute to Liz. It is a gift.