The principle point of Benedict’s Regensburg University lecture, which caused such a storm a few weeks ago, was, to quote from the lecture, “the intrinsic necessity of a rapprochement between Biblical faith and Greek inquiry.” Presumptuous though it was for one as ill qualified as I am, I have argued in print and from many podiums that the intellectual enterprise to which the collaboration between theology and philosophy was devoted would be newly kindled and greatly advanced by an alliance between theology and anthropology, the latter built on the pioneering work of René Girard. It is nevertheless true that the quest for truth which the latter alliance would enhance would be in continuity with that which for centuries was nobly sustained those drawing on the Greek philosophical tradition and the Christian theological heritage. It was to this collaboration that Pope Benedict turned the attention of his Regensburg University audience:

In point of fact, this rapprochement had been going on for some time. The mysterious name of God, revealed from the burning bush, a name which separates this God from all other divinities with their many names and simply asserts being, "I am", already presents a challenge to the notion of myth, to which Socrates' attempt to vanquish and transcend myth stands in close analogy. … This new understanding of God is accompanied by a kind of enlightenment, which finds stark expression in the mockery of gods who are merely the work of human hands (cf. Ps 115). Thus, despite the bitter conflict with those Hellenistic rulers who sought to accommodate it forcibly to the customs and idolatrous cult of the Greeks, biblical faith, in the Hellenistic period, encountered the best of Greek thought at a deep level, resulting in a mutual enrichment evident especially in the later wisdom literature. Today we know that the Greek translation of the Old Testament produced at Alexandria -- the Septuagint -- is more than a simple (and in that sense really less than satisfactory) translation of the Hebrew text: it is an independent textual witness and a distinct and important step in the history of revelation, one which brought about this encounter in a way that was decisive for the birth and spread of Christianity. A profound encounter of faith and reason is taking place here, an encounter between genuine enlightenment and religion. …

If the task of extricating truth from myth is fundamental to biblical religion, the contribution that Girard has made constitutes, as I have said, an extraordinarily important turning point. This is especially so in light of the multicultural environment in which this task is today necessarily being undertaken, and that multicultural environment was clearly uppermost in Benedict’s mind, for on the recovery of a genuine and determined quest for truth the future of Europe and of western civilization depends.

This inner rapprochement between Biblical faith and Greek philosophical inquiry was an event of decisive importance not only from the standpoint of the history of religions, but also from that of world history - it is an event which concerns us even today. Given this convergence, it is not surprising that Christianity, despite its origins and some significant developments in the East, finally took on its historically decisive character in Europe. We can also express this the other way around: this convergence, with the subsequent addition of the Roman heritage, created Europe and remains the foundation of what can rightly be called Europe.

“The fundamental decisions made about the relationship between faith and the use of human reason,” writes Benedict, “are part of the faith itself; they are developments consonant with the nature of faith itself.”

All of this came flooding in on me once again last week as Liz and I stood in the Stanza della Segnatura (a few steps from the Sistine Chapel) at the Vatican. For there the young Raphael, at the dawn of the modern age, gave perhaps the greatest artistic tribute we have to the deep interrelationship between faith and reason, one that amounts to a visual backdrop for the main point of Benedict’s Regensburg lecture. The room is dominated by the two giant frescos that face one another on opposite walls of the room and which serve in a way to interpret one another: The School of Athens and The Disputation on the Sacrament, commissioned by Pope Julius II and painted by Raphael in 1509 when he was only 27 years old. 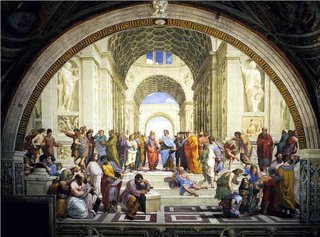 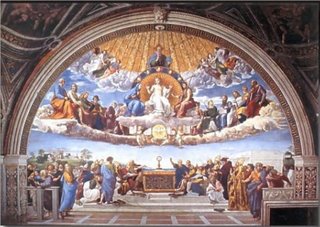 Each of the frescos depicts the quest for truth in the form of lively philosophical-cum-theological discussions among those most committed to finding truth. The School of Athens depicts the great philosophers of the ancient world with Plato carrying his “Timaeus” and pointing heavenward and Aristotle carrying his “Nichmoachean Ethics” and pointing to the earth at the center of the fresco. The architecture of the School of Athens resembles the nave of the Basilica of St. Peter’s which Raphael’s friend Donato Bramante had begun in 1506, and which would have been recognized by Romans of the time. The architectural suggestion is clear, and it is precisely the suggestion Benedict make explicit in his lecture: that the efforts of Greek philosophy to extricate truth from myth serves in its own unique way as a praeparatio evangelica, a necessary preparation for humanity’s ongoing attempt to understand how its situation was fundamentally altered by the events of Golgotha and Easter. In the fresco other famous figures from the philosophical tradition are recognizable: Socrates, Heraclitus, Ptolemy, Euclid, and so on. Though some of the figures are alone and in thought, the overall feeling of the scene is of a philosophical movement toward the viewer, giving the sense that the philosophical past is moving toward the viewer and beyond toward the fresco on the opposite wall: The Disputation on the Sacrament.

In this fresco, the movement is away from the viewer with a decidedly vertical thrust to it. This shift from the horizontal to the vertical suggests something that is extremely important to our own predicament, namely, that an essential concomitant of the interplay of faith and reason is the interplay of history and eschatology. Raphael has depicted a “disputation” – that is a theological exploration – regarding the mystery of the Trinity and of Christ as represented by the Eucharistic sacrament, the viaticum Christ left as manna-like nourishment for the sustenance of his disciples in their arduous journey through history. The Disputation is divided horizontally between what the medievals called the Church militant (meaning those still struggling in the midst of a fallen world) and the Church triumphant (meaning those who had entered into the truth toward which the earthbound were still reaching).

There is ever so much more to find in these marvelous frescos, but simply standing between them was something of a religious experience, a reminder not only of the deep interrelationship between faith and rationality but, more importantly, of the liturgical meaning of history and the eschatological horizon which gives it its true meaning.
Posted by Gil Bailie at 5:10 AM

In your series on The Bacchae of Euripides, you note that the Tragedians sensed the ... falseness? ... of the basis of their cultural coherence. The Bacchae really is an unveiling of the primitive sacred. But, you add, the near-prophetic direction toward which their thought led failed because they had no alternative, ultimately.

The Tragedians examination of cultural, ritual and even philosophical origins, as you say in the book quoting Ortega, led to "a strange sudden crisis" (253).

Benedict XVI clearly does not see difficulties in the fact that the early theologians of the Church utilizing the wonders of reason and philosophy, gifts of the Greeks to European civilization. And in this weblog entry, Gil, you do not see an immediate problem with it either, now, apparently.

IS "the best of Greek thought at a deep level," the movement away from myth toward the truth of the victim as seen in the Tragedians? Is it also syllogistic rationality?

I agree that myth serves as a "praeparatio evangelica" insofar as the "lamb slain since the foundation of the world" is present in the sacred violence that gave rise to Greek philosophy and reason. And I see nothing in the Catechism of the Catholic Church that is at loggerheads with mimetic theory.

My hope is that we will see Girard, like DeLubac, given credence as one who truly affirms the Magisterium and helps us move us all toward a deeper anthropology of Christ and humanity

Jeff,
I'm not sure what you saw as problematic. You're right to say that (in its own unintentional way) myth is praeparatio evangelica, but that was not what I meant. I meant that Greek philososphy was praeparatio evangelica inasmuch as it was an effort to move beyond mythic thought. That philosophy remained shy and overly deferential with respect to the scene of sacrificial violence which the myths existed to occlude doesn't invalidate its effort, any more than does the bolder and more religiously significant failure of Old Testament Judaism in this regard. That Girard's insights give us a more effective tool for doing what both philosophy and the Old Testament Judaism attempted is due to the revelation of the Cross which Girard both draws upon and explicates.