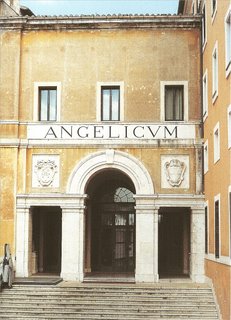 I was in Rome to take part in a conference entitled "The Good Company: Catholic Social Thought and Corporate Social Responsibility in Dialogue." Since I was out of my depth at a conference on corporate social responsibility and only very slightly more up to speed on Catholic social thought -- the Compendium of the Social Doctrine of the Church is a heavily annotated, 446 page treasure trove of insight) -- I had every reason to practice the virtue of modesty. Though some thought my paper a challenge to the conference presuppositions, I assured everyone that such was not my intention.

The conference was held as the venerable Pontifical University of St. Thomas (the Angelicum), home to a great deal of Catholic intellectual history.
My presentation, as I said in an earlier post, went well and was, as far as I could judge, quite well received. A lively and stimulating discussion followed.
Just as the last Roman conference at which I spoke occurred only three weeks after Liz's first brain surgery, this one occurred three weeks before her upcoming surgery. In both cases, we regarded the timing as providential, and we were able (thanks to the generosity of friends and the courtesy extended to us on both sides of the Atlantic) to turn a portion of our trip into a spiritual pilgrimage.

I will try to post again later today or tomorrow at the latest.