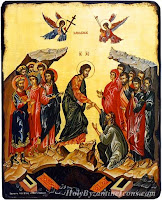 In his book on the theology of Romano Guardini, Hans Urs von Balthasar has this to say about the Resurrection:

Everything depends on this breakthrough, on the raising up of the whole human being from the grip of death and into the eternal life of God -- which incidentally, is why Christianity is the one universal religion that is not hostile toward the human body. And precisely this is the decisive criterion: the ultimate truth about God the Creator and about man is decided by the position one takes toward the human body. [my italic emphasis] 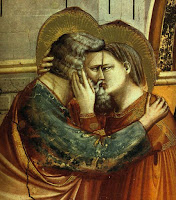 This, of course, is the same von Balthasar who elsewhere has written that sexuality "stands somewhere in the center of Christianity." And speaking of sexual intercourse itself, he goes on to say that the more it is trivialized in the post-Christian world "the more precious it is to Christians."

For another view of things, one can look to the Islamic world. For example:


Saudi Arabia's religious police have banned anything related to the lovers holiday and warned store owners not to sell such merchandise. (Los Angeles Times)

Hundreds of people have gathered in the Pakistani city of Karachi to demonstrate against Valentine's Day. (ABC News - Australia)

A council of Muslim leaders in Russia's Nizhny Novgorod region released a statement Wednesday calling for a "ban" on celebrating Valentine's Day, which is growing in popularity in Russia although it is not an official holiday. (Google News)

Christian overseas workers living in the Kingdom from the Philippines and other countries are taking extra precautions, heeding the Saudis’ warning to them specifically to avoid greeting anyone with the words “Happy Valentine’s Day” or exchanging any gift that reeks of romance. A spokesman for a Philippine workers group commented: “We are urging fellow Filipinos in the Middle East, especially lovers, just to celebrate their Valentine’s Day secretly and with utmost care.”


The Iranian despots, meanwhile, are trying to make sure the Saudis don’t outdo them in suffocating Valentine’s Day. Iran’s “morality” police order shops to remove heart-and-flower decorations and images of couples embracing on this day — and anytime around this day. In Pakistan, the student wing of the fundamentalist Islamic party Jamaat-e-Islami has called for a complete ban on Valentine’s Day celebrations. Khalid Waqas Chamkani, a leader in the party, calls it a “shameful day.”  -- Glazov's whole piece is here.

I am as wary and weary as many of the tawdry way the mystery of nuptiality has been exploited by the West's sexual revolutionaries, but both the antipathy for Valentine's Day in the Islamic world and its subversion by the sexual revolutionaries in the West are reactions against the very idea of sexual complementarity that Valentine's Day properly celebrates. If Islam rejects sexual complementarity because it presupposes the equal dignity of men and women, postmodern relativists reject it because it presupposes as indispensable to the mystery the communion of one man and one woman.


The Church, as always, is the sign of contradiction. Which von Balthasar fully recognizes when he is bold enough to say:


Because of her unique structure, the Catholic Church is perhaps humanity’s last bulwark of genuine appreciation of the difference between the sexes.  In the dogma of the Trinity, the Persons must be equal in dignity ... [and] ... in a similar way, the Church stresses the equal dignity of man and woman, so that the extreme oppositeness of their functions may guarantee the spiritual and physical fruitfulness of human nature.

Happy Valentine's Day. May we all come to our senses.

I think if you ask most westerners about Valentine's Day, its origin, why it's a day for lovers, etc., you'll discover that nearly everyone is ignorant about it.

This is also the case with Moslems. They associate Valentine's Day with the west and all its loose morals, which they reject to protect themselves and their daughters from corruption.

Although Islam does not promote a healthy sexuality in some important respects, I would not draw this conclusion on the basis of Moslems' rejection of Valentine's Day.

Thanks for the many posts. I don't give much feedback, but I am enriched by most of them immensely.