GEORGE WILL: The Republican Party elected its first president because he said no to a bright idea a Democratic Senator had which was, "I'll solve the problem," said, Stephen A. Douglas, "of expansion of slavery into the territories. Let's have popular sovereignty. People can vote it up or vote it down." A lawyer from Springfield, Illinois, named Lincoln, said, "No. That's bad. That's a bad idea. We're going to stop that idea." Now, was the Republican Party the Party of No? You bet they were. And it's a good thing.

Saying "No" to something that will do massive harm -- politically, economically, and culturally -- to our children and grandchildren is hardly obstructionism. If citing Will's remarks seems partisan, it is so, not in the party affiliation sense, for I belong to no political party, but in the moral sense that Will intended it. Nor in quoting it do we abandon our commitment to the "faith and culture" issues. In the post on Saturday I alluded to Fr. Michael Sweeney's reflections on the laity in the Church. In it he wisely said:


The human person can never belong to Caesar, but only to God; human life can never be "secular". This truth is also the foundation of democracy: because we belong to God alone it is necessary that we be consulted concerning the way that we are governed. There is really no other justification for the democratic process than this. Our deepest aspirations are centered more in God than they are in ourselves: we are destined for immortality and we have an appetite for divine things. We are bigger than the world is, and therefore our worship belongs to God alone. This is the foundation of the equality that pertains between persons: every human person has aspirations that the world cannot contain.

There are also things that are not ordered to God directly, but to the human person -- to man and woman. These are the things that are "secular": political and economic life, health, education, the arts, the sciences are not for the sake of God, but for the good of the human person. Such things are not profane; indeed, they have divine significance because of the divine dignity of the human person whom they serve. These secular pursuits have their own proper independence and competence. When I require heart surgery I am not so much concerned that the surgeon is a Catholic as I am that he or she is competent at surgery.

To which I would add: if you want an expert on our national pastime, baseball, who is also an expert -- by my lights -- on the meaning of the American political experiment, you could do a lot worse than to turn to George Will. His remarks are decidedly secular, and appropriately so, albeit when someone refers as he does to the seven deadly sins it is because he is a legatee of Catholic Christianity's moral patrimony.

If you take time to listen to what he says, you will be glad you did.
Part I:


If you need a graphic that provides circumstantial evidence of what Will was saying, here's something about how valued in the current administration are those who have had private sector experience. 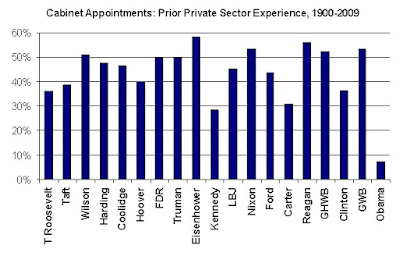