The Feast of the Chair of Peter

This is old news by the standard of today's 12-hour news cycle, but today's liturgical calendar prompts it.

I doubt if Harry Knox, president Obama's appointee to the Advisory Council on Faith-Based and Neighborhood Partnerships, will be celebrating today's feast. Knox is the director of the Human Rights Campaign's Religion and Faith Program. The HRC is a homosexual activist group with a history of slurs about the Catholic Church and its moral teachings. 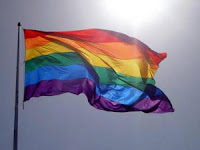 Mr. Knox did make it into the news lately (if by "news" one means reports on critical developments in our public life and not the karaoke media lip-syncing from the White House hymnal). Mr. Knox was asked whether he stood by a published remark to the effect that Pope Benedict XVI was "hurting people in the name of Jesus" for insisting that at the heart of the AIDS crisis is the breakdown of the family and the third-world adoption of the promiscuous sexuality promoted by the West's sexual revolutionaries, matters which are only compounded by the distribution of condoms and the implicit message about the recreational nature of human sexuality that accompanies such distribution.

Mr. Knox's answer, of course, was yes indeed he stood by that statement. As for the fact that reputable scientists had substantiated the pope's assertion, Mr. Knox dismissed the suggestion as breezily as though he were a member of the UN's Intergovernmental Panel on Climate Change (IPCC). The data these scientists quoted indicated that where condoms have been tried in one place and abstinence education combined with a campaign to reinforce the virtue of marital fidelity in another place, the incidents of AIDS dropped in the latter not the former. 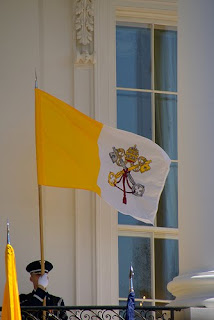 For his troubles, Benedict XVI (and the Catholic Church) received (who would have thought it?) a tsunami of morally sanctimonious contempt by the sexual revolutionaries, their international enablers, and (in more muffled tones) their colleagues embedded throughout the Obama administration.

The point, however, as many have stressed, is that -- once again -- the Obama administration has let its ideological mind-set and political agenda show. For the White House operatives, the choice between 2000 years of unbroken and unanimous Christian moral teaching and homosexual activists is a slam dunk in favor of the latter.

Meanwhile, count me among those whose hearts are filled with gratitude for the great gift to the world of John Paul II and Benedict XVI. 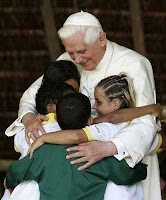 Happy Feast of the Chair of Peter.
Posted by Gil Bailie at 1:48 AM

The HRC is a homosexual activist group with a history of slurs about the Catholic Church and its moral teachings.

Gil, by "slurs," do you mean "criticisms"? I think of a "slur" as a short and catchy phrase meant to disparage individuals or groups by imputing base motives to them. A couple of your own favorites—“tolerance vigilantes" and "pom-pom media"—are good examples of slurs. Of course, slurs are a low form of rhetoric that only "other" people use, never we ourselves.

Don’t you think that the Episcopal Church is “hurting people in the name of Jesus” by allowing the blessings of same-sex relationships? Many Catholics do.

I think if we were to compare Mr. Knox’s rhetoric with yours, his would seem mild by comparison. Here is your description of members of Oakland’s LGBT community who lawfully petitioned their city council not to reappoint the city’s largest Prop 8 campaign donor, Lorenzo Hoopes, to the board of the Paramount Theatre of the Arts: “The members of the board...dare not publicly support [Hoopes] for fear of the lesbian, gay, bisexual, and transgender thugs who might take revenge on them.” The title of your piece was, “The Tolerance Vigilantes at it again...”

Sorry, Gil, but I think you get the prize.

So perhaps it would be more productive to end the slinging match about who is the worse bigot and ask, “Whose claims are justified?”

You claimed, without citing any sources, that “reputable scientists had substantiated the pope’s assertion.” I am curious as to where you found this information.

To buttress Mr. Knox’s criticism of the Pope’s assertion, I will cite the Centers for Disease Control (CDC), whose studies examining sexually active people at high risk for contracting HIV found that “even with repeated sexual contact, 98-100% of those people who used latex condoms correctly and consistently did not become infected.”

And the United Nations Joint Programme on HIV/AIDS and the World Health Organization issued a statement (8/16/2001) that condoms were “the best defense” in preventing sexually transmitted diseases, including HIV/AIDS.

Of course, the “best defense” claim assumes that the sexual partners have already decided not to abstain. Abstinence itself, as distinguished from abstinence education, is fail-proof, but in the real world, many people choose not to abstain. The next choice those individuals have is whether or not to use a condom. How could any moral person suggest that they should not do so?

Faith-based notions of sexuality are a significant vector of sexually transmitted disease and misery. (Austin Dacey, The Secular Conscience)