Beyond Parody, Beyond Satire 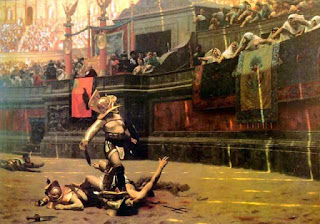 Jean-Léon Gérôme's "Thumbs Down"
The Washington Post reports on a "a new, faux-reality Web-based docudrama featuring actors trying to decide whether to have an abortion."

The idea for the "show," which launches Monday, was inspired, of all things, by Barack Obama's commencement address at Notre Dame University last year. When the president said he wanted "to find ways to communicate about a workable solution to the problem of unintended pregnancies," executive producer Dominic Iocco conceived "Bump." . . .

In the end, self-selecting strangers will become as a thousand Caesars, offering a thumbs up or down on the unborn. That some might struggle with their decision on behalf of the voiceless is some consolation. Otherwise, even in the faux world of a not-quite reality show, presenting such a profoundly personal and literally life-altering conflict as interactive entertainment is disturbing and slightly creepy.

Every attempt to treat abortion as a rational, moral "choice" exposes its heartlessness the more. Again, as Christ said: "For there is nothing hidden except to be made visible; nothing is secret except to come to light." Eventually, the issue will be as clear as it was for the spectators in Jean-Léon Gérôme's painting above. The Christian revelation is not a recipe for improving the world; it is the revelation of the truth. Its effect is to clear away the obfuscations that allow us to become complicit with evil without being fully and morally conscious of what we're doing.

Those who wince at this latest effort to treat abortion as the moral equivalent of a budget battle or a death penalty debate or the prudential decision about the use of military force might want to keep Notre Dame president Fr. John Jenkins in your prayers. For he and his administration provided the platform for the deeply disingenuous presidential address that provided the creators of this series with the impetus to produce it.
Posted by Gil Bailie at 1:55 AM

While I agree heartily that abortion and the "prudential use of military force" are not morally equivalent, and that it is our duty to point out the huge moral differences between them, I also believe that as Christians we should not hesitate to point out some similarities as well. For instance: both war and abortion are in this day and age supposed to be rather antiseptic procedures leading to peace, but both inevitably end up at least somewhat messy and lead to suffering. Both abortion and war inevitably end up killing defenseless children. Both abortion and war are administered by those who will not do the dying. Both often involve a shameless profit motive. Both can lead to permanent psychological trauma for those involved. In both cases the blood and body parts are usually hidden from the public so that we can go about our day more easily. Both deal death as a means to a "better" end.

I could go on. But this usually isn't my style, to sound this politically correct. But that's not my point. To me, it's not about liberals or conservatives; it's about Christians speaking truth. To me, the seamless garment still applies--though I fully agree we need point out that abortion is always an inherent evil, and that it occupies the vast majority of the material in the garment. But while there is not a moral equivalency as such--that doesn't mean there are not moral parallels worth mentioning. I keep thinking that we cannot make progress in one area without speaking the truth in all areas. Let's point out that abortion covers huge swaths of the garment--but let's not cut the garment into pieces.

Who is "for" the kind of war you are describing?
The American soldier and your cause are the same.