"I fear for my grandchildren" 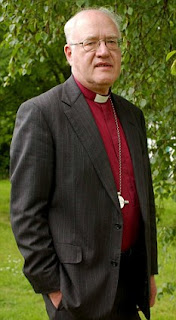 So says the former Anglican Archbishop of Canterbury.

The former Archbishop of Canterbury Lord Carey yesterday warned that Britain will be in ‘deep trouble’ if it does not cut immigration and stand up for its Christian values.

He called for a dramatic reduction in migrant numbers and insisted those who want to enter the UK should be made to understand its Christian heritage.

Lord Carey said: ‘We Christians are very often so soft that we allow other people to walk over us and we are not as tough in what we want, in expressing our beliefs, because we do not want to upset other people.’

He added: ‘What I think we must call for is an understanding on the part of those who come into our country that they are coming into one which values parliamentary democracy, which is built upon our Christian heritage.’

Lord Carey also warned that if concerns about the level and nature of immigration were not addressed, it would ‘play into the hands’ of the far-Right British National Party.

The story is here. Hat tip: Sunlit Uplands
Posted by Gil Bailie at 10:58 AM