... the very word entered the popular vernaculars in the early modern period not just because of the influence of classical humanistic thought but via reaction to the threat from Islam in the shape of the Turks. However, the spiritual capital of the concept of Europe has been squandered. In the Great Revolution of the West, God was dethroned as the public summum bonum and replaced by the nation.

The most salient date for this transition was the signing of the Treaty of Westphalia in 1648. Exactly two hundred years later, the second shoe dropped with the wave of revolutions rippled out from the French Revolution. (Forgive the mixed metaphors.) 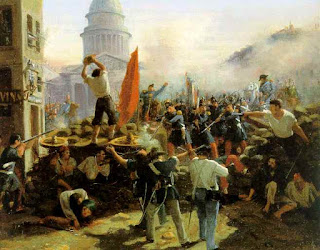 After 1848, the socialist tradition replaced the nation here by the proletarian revolution. Meanwhile, its capitalist alternative found yet another idol, creating the consumerist dystopia in which 'their God is their stomach.'

For some clarity on the situation, Nichols turns to Joseph Ratzinger -- now Pope Benedict XVI -- and in doing so touches on a point that should be of supreme interest to us in this critical moment in our society's history:

[Ratzinger] points out the curious tendency of the pursuit of freedom to throw up fresh forms of constriction ... The revolutions of the past transferred power from persons to institutions so as to secure objectivity in the exercise of power but they all too often produce a grey bureaucratic uniformity of the sort described in Kafka's novels.