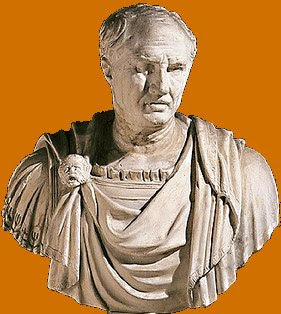 A funny thing happened to me on my way to a more irenic life. As some of my close friends know, I have lately wearied of blogposts bewailing the sundry anthropologically ludicrous assaults on social, cultural, political, and economic reality. Blessed is the occasional respite from such "watchman on the watchtower" duty. I have been working myself up to at least a partial renunciation of this duty, and I have certainly not abandoned that idea altogether.

However, as my resolve was forming, I happened today to see Mary Ann Glendon's piece on Cicero in the current edition of First Things, in which she praises Cicero for his ability to combine a philosophical and a political life. Among the many differences between me and Cicero (!) are my philosophical ineptitude and my distaste for political partisanship. (Yes, it's true. For those with longer than usual blogosphere memories, you may recall that almost exactly three years ago I am emphatically announced that I was not a neo-con or a theo-con (though I comes close to the latter). I was, I declared, a "rubicon" -- with all the mockery the term invites. The original thesis is here, and here, and here.

My abandonment of early and naive liberalism in favor of a conservative response to the juggernaut of loopy-liberalism-turning-totalitarian was just that, a response to radically changed circumstances in our culture. At some point in this persistent erosion of common sense and common decency, a moral and cultural Rubicon was crossed, and what I regard as a natural and healthy conservatism awakened in me.

Be that as it may, I am as tired of the culture wars as any well-balanced person must be, but, like any other kind of war, and contrary to the "peace now" bumper stickers, culture wars don't end when one of the proponents abandons the field. When that happens, the other side wins. This is pretty simple stuff; if anyone is having trouble with it, just give it two seconds thought.

Anyway . . . even without the Mary Ann Glendon article, I am not about to abandon the pro-life or pro-traditional marriage causes, nor am willing to go quietly into the dark night of cultural irresponsibility into which our present leaders are beckoning us. But . . . I was, and to some extent still am, pondering a more occasional foray into those matters. But then I read this in Professor Glendon's encomium to Cicero:

Although philosophy, as he told his son, was "indispensable to everyone who proposes to have a good career," it was always, for Cicero, a handmaiden to politics. Even philosophers, he said, have an obligation to concern themselves with public affairs, not only out of civic duty, but also for the sake of philosophy itself, which requires certain conditions to flourish.

In times when he was excluded from political life or overcome with personal sorrow, Cicero plunged into his philosophical studies with prodigious energy. On the those occasions, he could not help casting a glance down the path not taken. "Now that power has passed to three uncontrolled individuals," he wrote to his friend Atticus during the Triumvirate of Julius Caesar, Pompey, and Crassus, "I am eager to devote all my attention to philosophy. I only wish I had done it from the outset.

The mood didn't last, for the three uncontrolled individuals and many others were pulling at the cultural fabric of a social order which -- for all its many and egregious shortcomings -- was the sine qua non of the civilization of his day -- not unlike what is happening today.

Again, nothing could be more ludicrous than to invite a comparison with Cicero. It's just that I find Glendon's reflection on him a mild corrective to my recent weariness with the culture wars. Without extraordinary effort on the part of all those who feel called to it, the world we bequeath to our children may be unconscionably toxic and precarious, and we must do what we can to provide something healthier for them.

Please don't stop, don't even back off or slow down. What's the worst thing that can happen? Cut off your hands and head and put them on display in the Forum? Only a flesh wound.

Anyway, where do you think that "cultural Rubicon" was crossed?

Assuming that Glendon's “Cicero Superstar” was not a satire, may I say, please, that it was a strange piece to run in a supposedly Christian journal --- though he is “impressive” in a very anti-Christian way. As Prof. Glendon tells it (my words, not her’s) Cicero, while a consul, was a serial-killer (murderer)” who “ordered five of the [Catiline] co-conspirators to be executed without trial.” But, he also deplored, to his brother Quintus, the fact that he was tortured because, among other things, there was no “justice in the court.”!

She tells us that when Cicero was asked by Julius Caesar, Pompey and Crassus to join them in seizing power, he declined to join them because he saw this as an arrangement “clearly unconstitutional”! Huh? Multiple executions with no trial were OK. But this plan to seize power was as unconstitutional?! Sounds like a man straining at gnats but swallowing camels.

I was, however, cheered briefly when I read Cicero did not participate in the conspiracy to assassinate Julius Caesar. But, alas, as I read on, I learned “he approved the coup as necessary” and “came to regret that the assassins had not disposed (murdered -- JL) of Antony as well as Caesar.”! No surprise then that Antony ordered Cicero put to death -- and he was.

Glendon also notes that Cicero “sent away” his second wife, Publilia, because she was not as grief-stricken as Cicero when his daughter died in childbirth.

It might also have been noted but wasn’t that Cicero -- like the philosophers of his time who went around babbling about the Good, the True and the Beautiful --- never once denounced and/or called for a halt to the murderous gladiatorial “games” in which tens of thousands of innocent human beings and animals were slaughtered.

Prof. Glendon quotes Cicero as having said that since he was a boy his eager hope was, “Always to be the best and far to excel all others.” Why not the best. Interesting. That was Jimmy Carter’s slogan when he ran for President in 1976.

Finally, Prof. Glendon alludes (in paraphrase) to Cicero’s belief that despite the disadvantages in his life, all of them were outweighed “by the honor and satisfaction of a life devoted to one’s country and fellow men” --- except, I guess, for the five fellow-men he ordered put to death without trial, and for that wife he dumped for no defensible reason.

Sorry, but I’ll never understand why any Christian would ever write admiringly about a Cicero or any of the other ancient philosophers. They are, after all,

"... I’ll never understand why any Christian would ever write admiringly about a Cicero or any of the other ancient philosophers..."

What has Athens to do with Jerusalem?

As for Athens and Jerusalem, reading deeply in the Ratzinger/Benedict corpus is a good cure for the largely Protestant allergy to the Greco-Roman "contamination." The New Testament is saturated with its influence, as are the Fathers of the Church, who put the Greek and Latin conceptual and linguistic resources to extraordinary use in their effort to give expression to the Christian revelation and draw out its implications.
Reading Virgil in the light of Christianity, for instance, is a life-changing experience. He is virtually a Roman Isaiah.