The Untold Stories of Israel's Martyrs

Sandro Magister has this piece at Chiesa:

For the first time ever, in a book, depictions of the victims of Islamist hatred. Young and old, men and women. Struck down in a bus, at a bar, at the market. Killed solely for the "fault" of being Jewish 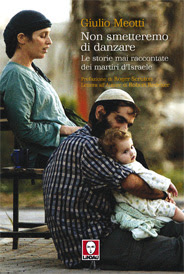 ROME, November 9, 2009 – Today Jews all over the world are commemorating their martyrs of the "Night of Broken Glass," the victims of the Nazi pogrom on the night of November 9-10, 1938, in Germany.

There is universal, mournful observance of that massacre and of the tremendous extermination of Jews by the Reich that came after it.

But the same is not done, in Europe and the West, for the many other Jewish victims who for years have been killed in Israel, assailed by Islamic terrorism.

Every time one of them is killed, it is covered in the news and then immediately ignored. The victim ends up buried in the vagueness of the "Palestinian question," viewed by many as Israel's "fault."

Meanwhile, one out of every three hundred Israeli families has been directly affected by an attack. The terrorist actions number in the thousands. More than 150 suicide attacks have been carried out, and for each of these the Israeli police estimate that they have prevented nine more. 1,723 people have been killed to date, 378 of them women. More than ten thousand have been injured.

The indifference of the West and of Christians in the face of this steady stream of victims, struck systematically in the midst of their daily routine, on the buses, in the cafes, in the markets, at home, now has a response in a book that recounts their stories for the first time. It finally tells us who they are.

The book was published a month ago in Italy, and translations will soon be published in New York and London. Its title is "Non smetteremo di danzare [We will not stop dancing]." And the subtitle: "Le storie mai raccontate dei martiri di Israele [The untold stories of Israel's martyrs]."

The author, Giulio Meotti, is already known to the readers of www.chiesa for two in-depth reports that have received extensive attention: on the most Islamified city in Europe, Rotterdam, and on the "Hilltop Youth," the latest generation of Israeli settlers.

His most recent book opens with a preface by English philosopher Roger Scruton, and with a letter by Robert Redeker, the French writer who has been living in a secret location since he began receiving death threats from Islamist fanatics.

Magister has an extract from the first chapter here.
Posted by Gil Bailie at 9:12 AM

A film I highly recommend, Gil and all, is Defiance (2008), based on the true events of some Russian Jews who saved and defended their fellows before the SS annihilators.

It wrestles with scapegoating, retaliation, legitimate defense, and many other familiar Girardian concepts including rivalry. The heroic brothers are hardly idolized in the film, but valorized, yes.

At one point, a rabbi prays, "O God, we have only one request: choose another people. We have no more blood to give..."

Truly suggested in these days of intensifying of Jews as scapegoats of the world once more.