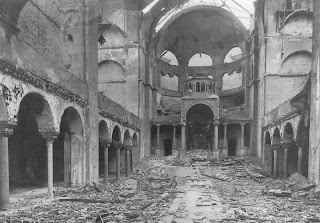 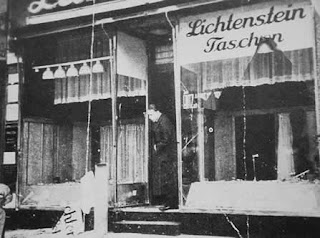 Jewish Shop
Kristallnacht: November 9, 1938
Twenty years ago today the Berlin Wall fell and millions were liberated from communist tyranny. But today is another anniversary: Kristallnacht, the beginning of the Nazi slaughter of European Jews. Here are the first paragraphs of Rober Wistrich's article about it in the Brussels Journal:

On November 9, 1938, a massive nation-wide anti-Jewish pogrom took place during peacetime across the entire territory of the Third Reich. The pretext for this orgy of violence against German Jews was the shooting in Paris two days earlier of German diplomat Ernst vom Rath by Herschel Grynszpan, a 17-year-old Polish-Jewish refugee. The state-organized pogrom, instigated by Hitler and Joseph Goebbels, resulted in the burning or damaging of more than a thousand synagogues; the ransacking of about 7,500 businesses, the murder of at least 91 Jews, and the deportation of another 30,000 Jewish males to concentration camps in Dachau, Buchenwald, and Sachsenhausen. This murderous onslaught against German Jewry, cynically described by the Nazis as the “Night of Broken Glass” (Kristallnacht), was a major turning point on the road to the “Final Solution” of the so-called “Jewish Question.” It signified that the Nazi regime had crossed a Rubicon and would no longer be deterred by Western public opinion in its “war against the Jews.” The economic expropriation of German Jewry, its complete social ostracism and public humiliation swiftly followed. Jews were banned from public transport, from frequenting concerts, theaters, cinemas, commercial centers, beaches, or using public benches. Only a fortnight after “Crystal Night,” the SS journal, Das Schwarze Korps, chillingly prophesied the final end of German Jewry through “fire and sword” and its imminent complete annihilation.

Today the specter of such apocalyptic anti-Semitism has returned to haunt Europe and other continents, while often assuming radically new forms. In the Middle East, it has taken on a particularly dangerous, toxic and potentially genocidal aura of hatred, closely linked to the “mission” of holy war or jihad against the West and the Jews.

Islamist anti-Semitism is thoroughly soaked in many of the most inflammatory themes that initially made possible the atrocities of “Crystal Night” and its horrific aftermath during the Holocaust -- for example, the pervasive use of the Protocols of the Elders of Zion with its perennial theme of the “Jewish conspiracy for world domination;” or the medieval blood-libel imported to the Muslim world from Christian Europe; or the vile stereotypical image of the Jews as a treacherous, rapacious, and bloodthirsty people engaged in a ceaseless plotting to undermine the world of Islam. To these grotesque inventions one must add such more up-to-date libels as Holocaust denial which has become a state-sponsored project in Ahmadinejad’s Iran and is increasingly pervasive in the Arab world. 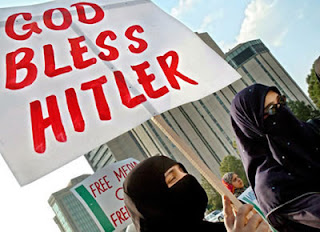 The whole piece is here.

Thank you, Gil. This is an important reminder that anti-Semitism is still a force in our world and that it must never be allowed to flourish. So much is now understood about the psychology of scapegoating, partly, as you know, through the work of René Girard. We now recognize that every society has its scapegoats and that the perpetrators are usually convinced of their justice of their cause. Scapegoating cannot occur in full consciousness of itself.

How are we to achieve consciousness of our own scapegoating tendencies? This is difficult, and perhaps we can only hope for limited success. One measure that we can adopt, however, is to monitor our own language when speaking about groups with whom we disagree. We must be hyper-vigilant about any sort of language that misrepresents the facts (or channels such misrepresentations), creates unwarranted negative linkages, stereotypes or dehumanizes our opponents, or seeks to inflame public passions against them. And above all, any grievances that we voice must have a rational basis. Age-old fears and antagonisms must not be allowed to thrive under the banner of tradition. This last requirement is a particularly difficult one for those whose faith seems to require scapegoating.

What I am describing is a kind of discipline that every single individual needs to practice. I believe that it is only through such monitoring of ourselves and others that we can avoid recurrence of events like the Holocaust. Islamist anti-Semitism is a stark reminder that the lessons of that tragedy have not yet been learned. But we have other reminders in our own society—the Southern Poverty Law Center (SPLC) counted 926 active hate groups in the U.S. in 2008. According to the SPLC, “all hate groups have beliefs or practices that attack or malign an entire class of people, typically for their immutable characteristics.”

As you know, I am very sensitive to any language that maligns homosexuals. And as you have seen, I can also be critical of gays and lesbians when they malign other groups or engage in irresponsible behaviors. But there can be little doubt that homosexuals are one of the major targets of religion-backed scapegoating in this country. I believe we could make huge progress toward addressing this problem if each of us can commit to practicing the disciplines that I listed above. We will all fail at times, because we are only human. But the lesson of the Holocaust is that we must try, because there is too much at stake to fail.