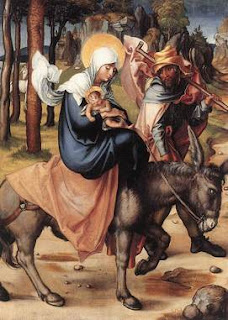 The Flight into Egypt

This from the (London) Daily Mail:

Labour's favourite think-tank says that because it would be hard to "expunge" Christmas from the national calendar, 'even-handedness' means public organisations must start giving other religions equal footing.

The report robustly defends multiculturalism - the idea that different communities should not be forced to integrate but should be allowed to maintain their own culture and identities.

"If we are going to continue as a nation to mark Christmas - and it would be very hard to expunge it from our national life even if we wanted to - then public organisations should mark other religious festivals too. We can no longer define ourselves as a Christian nation, nor an especially religious one in any sense. The empire is gone, church attendance is at historically low levels, and the Second World War is inexorably slipping from memory."

That sucking sound you hear is the "slipping away" of the spiritual life of British society. Into the vacuum will rush the forces that are now likely to overtake Europe unless it very quickly finds a way to reaffirm its religious foundations.

The slippery slope isn't only on the other side of the Atlantic. This from Lodi, California:

Too much time spent on teachings of Islam?

The parents of children at Houston Elementary School plan to complain to the school board about concerns they have with a seventh-grade history textbook, which they feel pays an undue amount of attention to the teachings of Islam.

That night Jim Self and his wife, Korina, flipped through their son's textbook, "History Alive!: The Medieval World and Beyond," and found at least three chapters dedicated to the Islamic faith, including an entire chapter dedicated to the Prophet Muhammad. . . .

Among the Selfs' concerns about the textbook is its definition of the word "jihad," which is described in the book as "the human struggle to overcome difficulties and do things that would be pleasing to God."

Other concerns stem from a passage on page 86 of the textbook, which quotes the angel Gabriel's words to the Prophet Muhammad.

The Selfs said the textbook mentioned Jesus only twice, and other major religions were only given a paragraph of explanation.