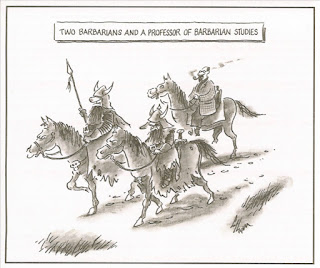 Visiting with friends recently, I learned that their eldest, just off to his first year at a respected university, was taking a freshman course in "Islamophobia."

This week CNN has aired a series of programs the underlying premise of which is the moral equivalence of the Christian, Jewish, and Islamic predisposition to violence, something from which many on the left only dissent by claiming -- implicitly or explicitly -- that the greater threat comes from the "Christian right" or the "fundamentalist Christians" -- both terms meaning simply people who still hold to Judeo-Christian moral principles and still feel a degree of patriotic loyalty to the society that has fostered the political freedoms and economic prosperity for which they are grateful. (I do not have a television, and I have not seen the CNN series, but everything I have read about it leads me to believe that it is a slightly more subtle version of the line long espoused by the major media outlets and the American professorate.)

Since the attacks of September 11, 2001, there have been roughly 9000 terrorist attacks carried out in the name of Islam. Islamic radicals are palpably on the rise in virtually every European country, to the consternation of many. Violence in the name of Islam is literally everywhere one looks today. But CNN hasn't veered from the doctrine to which it has long been wedded; nor have the academicians. The problem requiring the immediate attention of the West's fledgling undergraduates is "Islamophobia." Imagine a course on the irrational fear of Nazis in the 1930s, an analogue that will not seem at all preposterous in historical hindsight.

Sweeping moral problems under a linguistic rug is the special hobby of postmodernists. The terms "Islamophobia" and "homophobia" function to silence misgivings that are anything but irrational. The misgivings are rooted in moral, historical, and cultural reality. But as those who harbor these misgivings are made to swallow them for fear of being accused of barbarism and psychopathology -- which is to say, the violation of the speech codes formulated for the purpose of silencing legitimate criticism -- those misgivings don't go away. They may well drop below the level of consciousness, for no one likes being reminded by an inner voice of his cowardice in the face of social intimidation. But these misgivings remain, and as the social revolutions that give rise to them grow bolder -- much of the opposition to them having been silenced -- there is a real possibility that these choked-back misgivings might become so loaded with resentment that when they do finally make it to the surface they might do so precisely as Islamophobic or homophobic fury. And were that to happen, it would be both a moral and social catastrophe.

By using recently manufactured neologisms such as "Islamophobia" and "homophobia" to silence legitimate criticism of movements committed to a fundamental reordering of cultural life and prevent free and open public debate about the cultural impact of these revolutions, those behind these movements may be creating self-fulfilling prophecies.

On the matter of "Islamophobia," there are signs in Europe that a tipping point may be approaching, a point at which ancestral Europeans may suddenly panic. Social panics are anything but edifying, and European history doesn't inspire confidence that one provoked by the very legitimate fear of the Islamization of Europe would be an exception.

Were those who have been long intimidated into silence to finally rise up, however, those who threw these accusations at the heads of all who resisted their revolution can be counted on to seize the opportunity to declare that they were right all along.

So, who would get blamed? The answer of course is the moral realists, the heirs of Augustine, who have known all along what a precious and fragile gift a harmonious civil order is and how quickly and precipitously it can descend into chaos if the moral presuppositions on which it was built are dismantled.

As you wrote in Violence Unveiled, the practice of victimhood has become an inchoate, unconscious, yet nearly indispensable social skill, with the officer-class arbitrators of victim capital residing in the hands of the professorate, EU commissioners, and the APA (the law profession, 'progressive' legislators and judiciary their handmaidens).

Confronted by the stolid comportment of a mass of humanity still given ballast and stability by the primitive sacred (anthropologically speaking) -- Islam -- these lackeys are only too ready to kowtow with the obsequious nature of a sultan's bootjack. Particularly if the sultan has deep pockets and large oilfields.

IMO, the west's addiction to oil more than resembles a massive expression of idolatry with gnostic alchemy thrown in for good measure. The unacknowledged collusion with sin traces its power all the way back to the pump, the refinery, the derrick. Erase that reality, and the victimhood of Muslims becomes part of a level playing field.

Until that happens, ultimate victimhood for the time being starts with Saudi sheiks and their religious affiliation. The west is just a pauper and beggar at their gate, trying to stay in their good graces.