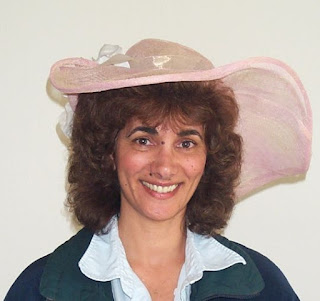 Liz horsing around in a hat she would never have worn in public. 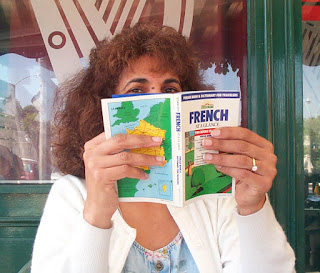 I miss her more every day.
It has been quite some time since I discovered one of the little messages she left hidden like Easter eggs where she knew I would eventually (but not too quickly) find them. I had almost forgotten about these tricks of hers. But last night I found an audio file of Liz reading the Adrienne Rich's poem "Stepping Backward."

I don't know exactly when Liz recorded this poem, but it was surely in the last six or eight months of her life. She put the recording in a directory on my computer that I almost never open. Tonight, looking for something else, I stumbled upon it quite by accident, just as she no doubt had planned.

What an incredible gift it is. Liz's voice is the source of its power for me, of course, but the poem couldn't have been more suited to her loving purpose.

Good-by to you whom I shall see tomorrow,
Next year and when I'm fifty; still good-by.
This is the leave we never really take.
If you were dead or gone to live in China
The event might draw your stature in my mind.
I should be forced to look upon you whole
The way we look upon the things we lose.
We see each other daily and in segments;
Parting might make us meet anew, entire.

You asked me once, and I could give no answer,
How far dare we throw off the daily ruse,
Official treacheries of face and name,
Have out our true identity? I could hazard
An answer now, if you are asking still.
We are a small and lonely human race
Showing no sign of mastering solitude
Out on this stony planet that we farm.
The most that we can do for one another
Is let our blunders and our blind mischances
Argue a certain brusque abrupt compassion.
We might as well be truthful. I should say
They're luckiest who know they're not unique;
But only art or common interchange
Can teach that kindest truth. And even art
Can only hint at what disturbed a Melville
Or calmed a Mahler's frenzy; you and I
Still look from separate windows every morning
Upon the same white daylight in the square.

And when we come into each other's rooms
Once in awhile, encumbered and self-conscious,
We hover awkwardly about the threshold
And usually regret the visit later.
Perhaps the harshest fact is, only lovers--
And once in a while two with the grace of lovers--
Unlearn that clumsiness of rare intrusion
And let each other freely come and go.
Most of us shut too quickly into cupboards
The margin-scribbled books, the dried geranium,
The penny horoscope, letters never mailed.
The door may open, but the room is altered;
Not the same room we look from night and day.

It takes a late and slowly blooming wisdom
To learn that those we marked infallible
Are tragi-comic stumblers like ourselves.
The knowledge breeds reserve. We walk on tiptoe,
Demanding more than we know how to render.
Two-edged discovery hunts us finally down;
The human act will make us real again,
And then perhaps we come to know each other.

Let us return to imperfection's school.
No longer wandering after Plato's ghost,
Seeking the garden where all fruit is flawless,
We must at last renounce that ultimate blue
And take a walk in other kinds of weather.
The sourest apple makes its wry announcement
That imperfection has a certain tang.
Maybe we shouldn't turn our pockets out
To the last crumb or lingering bit of fluff,
But all we can confess of what we are
Has in it the defeat of isolation--
If not our own, then someone's, anyway.

So I come back to saying this good-by,
A sort of ceremony of my own,
This stepping backward for another glance.
Perhaps you'll say we need no ceremony,
Because we know each other, crack and flaw,
Like two irregular stones that fit together.
Yet still good-by, because we live by inches
And only sometimes see the full dimension.
Your stature's one I want to memorize--
Your whole level of being, to impose
On any other comers, man or woman.
I'd ask them that they carry what they are
With your particular bearing, as you wear
The flaws that make you both yourself and human.

I miss her too, Gil. But I got to meet her- thank you for that.