Shortly after Liz and I met, and as we were getting to know each other by exchanging daily email messages, there appeared on the cover of the Magnificat a reproduction of a painting by Guido Reni entitled St. Matthew the Evangelist. The painting (below) depicts a moment of recognition as Matthew and an angelic figure gaze at one another, the evangelist’s quill poised to record the inspiration. When I first saw this image, I was struck by how it seemed to capture something of the relationship between the two vocations to which Liz and I were called – the contemplative life and the evangelical life. I was eager to find a reproduction of the painting, and I searched high and low for one, but to no avail.

A few months later, I gave a parish mission in New England near where Liz was living, and we visited. One day while we were at St. Joseph’s Abbey together, we went to the Abbey bookstore. Liz had been a regular at the bookstore for years, and on the few visits I had made to the area I, too, had discovered what a rich resource it was. While browsing in one corner of the bookstore on this particular day, I looked over to where Liz was standing, and there on the wall above her head was a beautifully framed reproduction of the Reni painting! I could hardly believe it. I asked the monk at the desk if it was for sale, and he said: “Oh, that! Why, yes, it’s for sale. It’s been hanging up there forever; you can have it at half-price.” It now hangs in a very prominent place in our home. 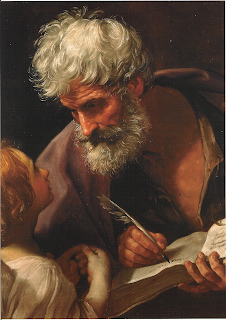 Adding to the amazement, when Liz and I were in Rome shortly after her first surgery we toured the Vatican Museum. As we walked into one of the rooms of the museum, we suddenly found ourselves standing right next to the Reni painting, which had by then become an emblem of our relationship and the extraordinary ways in which our two vocations were mutually enriching. It was another graced moment.

Which brings me to this:

For some reason, all this week I have been conscious that the one-month anniversary Liz's death was approaching. She died at exactly 4:50 p.m. on February 18th, one month ago today. The closer the day came, the more significance it took on for me. I wondered how I might mark the occasion. I would of course take a rose to Liz's gravesite as usual, but I wondered how else the occasion might be marked.

Now, for the last few weeks, I have been reading daily excerpts from the many books, articles, and homilies of Ratzinger/Benedict which have been reproduced in a little book entitled Benedictus. The book contains a short passage from the pope's many books and homilies for each day of the year. This morning I opened the book, and found that this is the page for today: 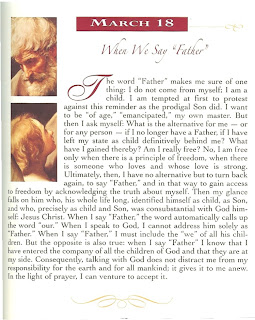 Just a coincidence. Similar to countless other "coincidences" -- some far more striking than this one -- with which the life Liz and I share(d) was (and is) regularly punctuated.

Even though the passage from Benedict's Co-Workers for the Truth which was chosen for today in the anthology of his writings deals with the Gospel for today -- the prodigal son story in Luke -- something the pope says there seems apropos of this fear of being thought religiously juvenile. By looking at Christ, writes Benedict:

... my glance falls on him who, his whole life long, identified himself as a child, a Son, and who, precisely as child and Son, was consubstantial with God himself ...

"Truly I tell you, unless you change and become like children, you will never enter the kingdom of heaven." Nor hear from its inhabitants.

What you say in your post reminds me of the chapters in A Theater of Envy on the conversion of Leontes, who fails to recognize that the "statue" in front of him is actually his wife, in the flesh. The fear of being taken in by representation...