The day two years ago when we learned that Liz had a brain tumor which was virtually certain to take her life was a day of grace -- to which we were probably made sensible by virtue of being in a state of shock. That night, however, after Liz was asleep, I was in agony. I could not sleep. After hours of lying there, I turned on the light and picked up at random one of the half-dozen books laying by the bedside. It was a book of Hans Urs von Balthasar’s theological writings. I opened it to where the bookmark was, and this is the first thing I read:

Genuine love between persons is probably more rare than one thinks -- although most people believe that they have some share in it, and perhaps they do attain it for brief moments. …

I am not thinking about the misfortune of passion ... but about something that can be much simpler and that to succeed requires a Christian predisposition: a dedication of one’s whole life to a you in whom the lover sees the quality of the absolute shine forth, and with it the inclusion of the whole world. . . .

The brilliance of the loving choice from the regions of the divine raises the individual, lost in the anonymity of the species, to the uniqueness of a person. In this ultimate mutual acknowledgment between two lovers, eros is able not merely to offer the initial spark, it can go along the whole way, if only it allows itself to be purified into transfigurations beyond itself . . .

The Eros that stirs one deeply does so because it is the initial hint of the Trinitarian mystery of self-gift in whose image and likeness we are made. But, alas, ours is a world in which this dimension of eros has largely been lost, and many who live amid the eroticized hysteria that has filled the vacuum are unaware of what might have been. They live haunted by a longing the true meaning of which they have been deprived. As the poet Coventry Patmore put it:

Love wakes men, once a lifetime each;
They lift their heavy lids and look;
And, lo, what one sweet page can teach
They read with joy, then shut the book:
And some give thanks, and some blaspheme,
And most forget; but, either way,
That and the child’s unheeded dream
Is all the light of all their day.

Without the "Christian disposition" to which von Balthasar alludes the sacramental ordination of eros remains obscure. The attraction is still tinged with this mystery, and perhaps the lovers "do attain it for brief moments." All too often, however, the initial spark flickers out and, following what Yeats calls "the shudder in the loins" the lovers are returned to "the anonymity of the species." Transfigured by the recognition of the Absolute in the beloved, however, eros, as von Balthasar puts it, goes along the whole way.
Only in the days and now weeks following Liz's death have I come to realize the real meaning of this insight. 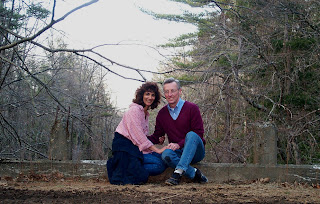 Love wakes men once a lifetime each.