News from the City of St. Francis

A front page blurb for a feature story within last Saturday's San Francisco Chronicle read: "Aztec Snake God Lords It Over a Mission District Mini-Park." The article read in part:

One Sunday last month, costumed dancers unveiled the revitalized park opposite the Brava Theater. The garden was an artful set designed for play, but it contained a secret: a stunning concrete and mosaic Quetzalcoatl, the mythic feathered sea serpent of the Aztecs.

It took center stage before excited children, parents and even Mayor Gavin Newsom (escorted by mounted police). The snake, dipping in and out of the rubberized paving that surrounds it, nimbly skirts slender jets of water that spout, erratically, straight up from the ground like Old Faithful. Its easy-to-climb, 10-foot-long head is studded with mirrors, flower-shaped tiles, and bits of glass and porcelain carefully set in place by volunteers assisting husband-and-wife designers Mark Roller and Colette Crutcher.

It's all quite charming, of course, and multicultural to a fault. The timing was a bit off, however, for the cheerful celebration of Quetzalcoatl took place in uncomfortable proximity to the central feast of the other Latino cultural heritage, Our Lady of Guadalupe. To make matters even more convoluted, within a few days of the celebration, Mel Gibson's Apocolypto opened in the theaters. 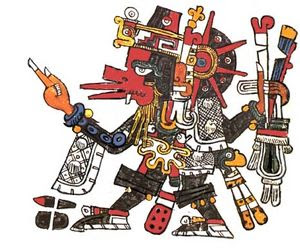 One thinks of Henry Adam's comparison of the Virgin and the Dynamo in his "Education of Henry Adams," in which he wondered whether the dynamo, which seemed to be the symbol par excellence of the new empirical and materialist age, would be a culturally fruitful as was the one to whom so many of the great European cathedrals were dedicated. The devotion to Our Lady of Guadalupe was an explicit rejection of Quetzalcoatl and all his works, a central mythic figure in the mesoamerican cultures which were so savagely sacrificial.

Gibson's latest film has perhaps more to say about the cultural meaning of Christianity than did his The Passion of Christ. Like the earlier film, Gibson dwells at interminable length on scenes of endurance, a strange preoccupation of his, but in most respects the film is truly extraordinary. It depicts the state of the pre-Columbian cultures of the south in terms that will surely be unwelcome by the rose-colored-glasses multiculturalists among us, and it hits deftly at the end that help is on the way in the form of those who were to bring Christianity to that blood-drenched land. 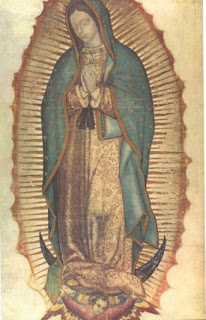 Coincidently, yesterday, my old friend George Wesolek, a Cornerstone Forum board member and a man who is deeply involved in the cultural tensions with which San Francisco is now beset, sent me an email to which he had attached the LifesiteNews article originally entitled "Pro-Life Meaning of Our Lady of Guadalupe," which I heartily recommend to you. Here's a sample:

Academic William Tsamis writes that "in 1487, at the dedication of the great temple which stood in what is today Mexico City, a massive ritual sacrifice took place in which over 10,000 people perished on the temple's altars -- the killing was continual, four at a time, from sunrise to sunset."

The horrific practices of human sacrifice and the concentration on sacrifice of children, since they were considered 'pure', came to an end not only with the conquest of the Spaniards, but with the conversion of the native people of the Americas to Christianity. That happened to a large extent thanks to what Catholics and others believe was an apparition from heaven of Mary pregnant with the Christ Child - referred to as 'Our Lady of Guadalupe'. ...

For many in the pro-life movement, incidentally not only Catholics, Our Lady of Guadalupe, is seen as a symbol of hope for ending our modern-day human sacrifice of abortion which now far exceeds in number and kind the brutalities practiced by the Aztecs and Mayans.

U.S. philosopher Peter Kreeft, in his book Three Approaches to Abortion, makes the connection. He writes, "About 500 years ago, a strikingly similar culture of death reigned in Aztec Mexico. Some historians estimate that one out of every three children . . . were ritually sacrificed to their bloodthirsty and demanding god . . . exactly the same proportion of children conceived in America who are aborted today"

From Our Lady of Guadalupe to Quetzalcoatl: Cultural history in reverse.

Conservatives of the rubicon* variety will not be charmed.

Always one to state the obivous:
the end came to the pre-Columbians with the "apocalypsis" of the New World, to those who lived in their own very Old World. I don't mean to force the correspondence with our own Old World, but how can it be avoided?