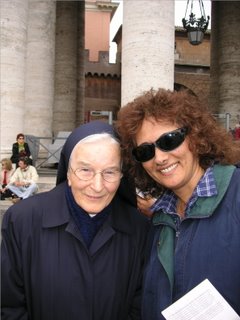 In the Roman liturgy of late, the theme of angels has recurred, putting one in mind of mysteries rarely given thought otherwise. As Liz and I leave for Rome – a city of churches full of angelic images – a memory comes to mind of our last visit to Rome, during Holy Week of 2005 when John Paul II was nearing his death and just after Liz’s first surgery. Thanks to friends in modestly high places, we had tickets for the Holy Week liturgies at St. Peter’s, but we were nevertheless encouraged to queue up long before the liturgies were to begin. So on Good Friday, since Liz was still feeling the effects of her surgery, I left her at the apartment and went to wait in line outside the Basilica.

When Liz arrived, I suggested that she find a place to sit along the colonnade, which was fifty feet or so away from where I was standing in line. Not long after that, a little elderly nun appeared beside me. I say it that way – she appeared beside me – because it felt even then almost like an apparition. She was not in line. She was just standing there, almost floating, quietly gazing about her. When our eyes met, I motioned for her to take a place in line in front of me. She smiled kindly and came to stand by me in line. She was obviously a woman of prayer, at ease with being in the company of others without the need to say anything. We stood there in silence for some time.

After a few minutes, I introduced myself. She told me she was Sister Benedicta, a member of a German religious order that did missionary work, and that she was living and working in Rome. We spoke only a few words. It was clear to me that I was in the presence of a remarkable woman of prayer. I had with me a photo of Liz. I took it out and gave it to her, telling her briefly about Liz’s medical situation and asking for prayers on Liz’s behalf. She smiled kindly and assured me that she would pray diligently for Liz.

In a few minutes, Liz joined us, and I made the introductions. This lovely nun accompanied us into St. Peter’s and sat with us for the Good Friday liturgy, at which the papal preacher Fr. Raniero Cantalamessa gave a homily. Liz and I had visited Fr. Cantalamessa earlier in the week, and he had emailed me the English translation of his Good Friday homily. (As we waited in the Basilica for the liturgy to begin, I gave Sister Benedicta a preview of the homily. She listened attentively and looked at me quizzically, no doubt wondering how in the world I, who knew no Italian, knew what the upcoming Italian language homily would be.)

During the liturgy, Sister Benedicta sat on one side of Liz and I sat on the other. She seemed especially attentive to Liz. Though she was quite elderly, and the arrangement of chairs made it difficult, she knelt on the hard marble floor of St. Peter’s at the solemn moments of the liturgy. So solicitous was she of Liz’s condition, however, that when Liz could no longer stand during the long Gospel reading, she sat down with her, clearly so that Liz would feel less conspicuous. It was a beautiful gesture, so obviously expressive of this gentle woman’s generous spirit. At one point, she reached over and took Liz’s hand and smiled. When the service was over she walked with us in silence for a while, and then we were separated in the crowd. (The apparition had ended.)

Liz and I were both very touched by her quiet presence and her gentleness. My thoughts have returned often to that marvelous woman. Thanks to her, I find it easier to believe in angels.

With limited time and limited internet access, my postings may be intermittent at best during our trip. I will check in when I can, as I hope you will.
Posted by Gil Bailie at 6:04 AM