The following essay by Geoff Wood is offered for your Advent reflection.

There is no element more conspicuously absent from contemporary poetry than nobility. Wallace Stevens 1942

In the days before television the trends of current events were presented to the public at the movie theater in a 20 to 30 minute documentary called The March of Time. The title must have been taken from that old saying, “Time marches on.” And so it does until whatever events were shown in that documentary have long since been swallowed up by time – indeed, even Time Magazine is getting slimmer and slimmer and may one day disappear like the people and events narrated in its contents.

You will hear Time’s relentless pace tolled out every day on our obituary pages – as in John Donne’s famous line: Ask not for whom the bell tolls, it tolls for thee. And this relentlessness, this seeming inevitability of change, nothing holding firm, tends to get people down – so much so that in his Sonnet 65 Shakespeare can speak of Time as a kind of raging force which neither brass, nor stone, nor earth, nor . . . sea can withstand. And if that be the case, he asks, How with this rage shall beauty hold a plea, / Whose action is no stronger than a flower? / . . . how shall summer’s honey breath hold out / against the wrackful siege of battering days, / When rocks impregnable are not so stout / Nor gates of steel so strong, but Time decays?

And yet thanks to our Christian heritage, we defy Time’s rage even as St. Paul defies it in today’s second reading (1Cor 15:20-28)* where he says of the risen Christ: For he must reign until he has put all his enemies under his feet and the last enemy to be destroyed is death. As Christians we believe that time need no longer be synonymous with death but experienced as a crescendo, as an overture to our living forever – somehow! And as such, each day becomes – no longer a roadblock – but a gateway to wider horizons. Time is redeemed. Indeed, if we are true Christins, really moved from the depths of our Scripture, we should confront the so-called rage of Time with a rage of our own. Or as the poet Wallace Stevens has written, we must confront the violence of meaningless Time with our own violence from within – which he defines as “the imagination pressing back against the pressure of reality”. Translate “imagination” as creative faith, hope and love.

And so to Shakespeare’s complaint how with this rage of time can beauty hold a plea Stevens looks to art, poetry, and I might add the beauty of today’s Psalm “The Lord is my shepherd, I shall not want.” Specifically Stevens refers us to the rage evident in the watercolors of the sculptor Jacob Epstein, whose flowers “make no pretence to fragility. They shout, explode all over the picture space and generally oppose the rage of the world with such a rage of form and color as no flower in nature or pigment has done since Van Gogh.” (Look up Epstein’s flower images on Google.com.)

As Christians we are often encouraged to be gentle, sweet, calm, pious amid the storms of life. But maybe rage should be the better expression of what we believe (as it was in subtle ways in the writings of Flannery O’Connor). Like Christ (whom we honor as so much more noble than monarchs of old, whose noble rage was shown when he chased the money changers from the Temple) we ourselves should live nobly, defiantly in the face of all that would reduce us to timid souls, cringing within an ominous universe. We should affirm life and beauty, stand up to all that has made of Time a dead end against which beauty cannot hold a plea, being so fragile. But what was Christ raised upon the cross but someone fragile – and yet he rose again as someone of whom the Book of Revelation says: His eyes flamed like fire; his feet gleamed like burnished brass refined in a furnace, and his voice was like the sound of rushing waters. Like an Epstein dahlia? 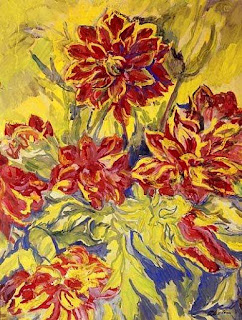 *reading for the last Sunday of the Liturgical Year - Christ the King Sunday
Geoff Wood lives in Sonoma. He holds a doctorate in theology and a licentiate in scripture from the Catholic University of America and the Pontifical Biblical Institute in Rome. And his soul holds a third indelible mark.
Books by Geoff Wood:

Posted by Randy Coleman-Riese at 4:49 PM