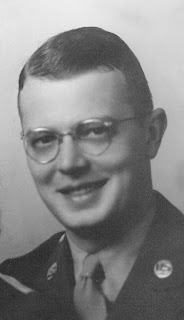 Gilbert Hunt Bailie
Killed in the Battle of the Bulge
January 7, 1945
I visited the cemetery in Belgium where my father's body was buried for three years, until it could be returned to the United States. It was in a vast sea of crosses -- and an occasional star of David -- for as far as one could see. From reading my father's letters to my mother, it is clear that these were young men who instinctively knew that the challenge they faced with precisely the preservation of civilization.

He attended Mass on the morning of his death, something that gave my mother great consolation.

We own men of his generation a great debt.
Posted by Gil Bailie at 1:10 PM