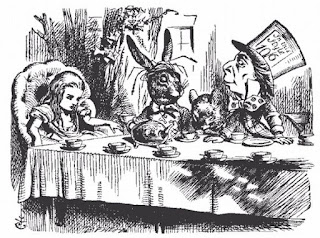 Mark Hyman has a column in the American Spectator which contains some commonsense observations about the lack of commonsense that often today "goes without saying." The items on his longer list with which I identify are these:

The President appoints as the nation's "Safe Schools" Czar a lifelong activist advocating the sexual exploitation of children. . . .

A national leader who accomplished absolutely nothing was given the Nobel Peace Prize over freedom-loving grassroots leaders and citizens -- including scores who were killed -- who opposed totalitarianism in Iran.

The practice of religion -- particularly Christianity -- is treated like a hate crime.

Officials in charge of the Justice Department's anti-terrorism policies are the same people who worked feverishly to free to terrorist detainees. . . .

American citizens and businesses generously donate more than a billion dollars to ravaged corners of the globe such as Southeast Asia and the Caribbean yet other countries that offer a mere pittance dare to criticize our motives.

The remarkable accomplishments of World War II veterans are denigrated by a president who apologizes for their having defeated Nazism and Japanese Imperialism. . . .

The trial of 9/11 mastermind Khalid Sheikh Mohammed and other terrorists is moved to the U.S. while the trial of Navy Seals alleged to have given a fat lip to a terrorist leader may be moved to Iraq. . . .

'Curiouser and curiouser!' cried Alice (she was so much surprised, that for the moment she quite forgot how to speak good English) . . .
Posted by Gil Bailie at 3:24 PM

Gil, you've quoted Mark Hyman as saying that the nation's "Safe Schools" Czar advocates the sexual exploitation of children, and you appear to endorse Hyman's views. Hyman has made a serious charge there. (The person he describes as a "Czar" is, in fact, not one, because his appointment had to be approved by the Senate.) Are you offering any evidence to back up this accusation, or is this just more slander? We've already had this discussion about Kevin Jennings (the one Hyman characterizes as a "Czar"), and you were unable to provide evidence of your claims. Don't you think it might be time to stop the smear campaign? Whoever wrote the Ten Commandments apparently believed that bearing false witness was a grievous sin. I would think that a self-professed Christian would want to be hyper-vigilant about falsely accusing anyone. After careful research, I could find no evidence that Jennings advocates the sexual exploitation of children, and you did not provide any. What do you think we should conclude from that?

Alice's "curiouser and curiouser" might have a different application than the one you imagine.

"The practice of religion--particularly Christianity--is treated like a hate crime."

What a brainless thing to say. Gil, why would you even quote something like that? You yourself treat certain religious practices as hateful, and so do I. I do not approve of honor killings, persecutions of infidels and apostates, suicide bombings, jihads, fatwahs, discrimination against homosexuals, or criminalizations of blasphemy. And you yourself do not approve of some of these. There are in fact certain religious practices that may legitimately be described as hateful. We only need to read the news--about Fred Phelps or Mahmoud Admadinejad or Pat Robertson--to realize that religious practices often verge on hate crimes. So, I think Mark Hyman's statement is completely unjustified and completely lacking in subtlety. Why do you bother reading such writers when there is so much better available?