Gendercide: A Population Bomb of another sort 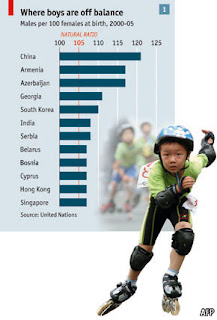 The March 4th edition of The Economist has an extensive article on the gender imbalance created by a combination of governmental meddling -- whether explicitly totalitarian or totalitarian-lite -- cultural prejudice, and outright misogyny. The piece begins with this:


XINRAN XUE, a Chinese writer, describes visiting a peasant family in the Yimeng area of Shandong province. The wife was giving birth. “We had scarcely sat down in the kitchen”, she writes (see article), “when we heard a moan of pain from the bedroom next door…The cries from the inner room grew louder—and abruptly stopped. There was a low sob, and then a man’s gruff voice said accusingly: ‘Useless thing!’

“Suddenly, I thought I heard a slight movement in the slops pail behind me,” Miss Xinran remembers. “To my absolute horror, I saw a tiny foot poking out of the pail. The midwife must have dropped that tiny baby alive into the slops pail! I nearly threw myself at it, but the two policemen [who had accompanied me] held my shoulders in a firm grip. ‘Don’t move, you can’t save it, it’s too late.’

“‘But that’s...murder...and you’re the police!’ The little foot was still now. The policemen held on to me for a few more minutes. ‘Doing a baby girl is not a big thing around here,’ [an] older woman said comfortingly. ‘That’s a living child,’ I said in a shaking voice, pointing at the slops pail. ‘It’s not a child,’ she corrected me. ‘It’s a girl baby, and we can’t keep it. Around these parts, you can’t get by without a son. Girl babies don’t count.’”

It doesn't get much morally grimmer than that, but this explicit infanticide represents only the most horrific aspect of the problem, for due to the ability to determined the sex of a child in the womb, sex-selective abortions are especially rampant in China, India and elsewhere. The article goes on to address the correlative social catastrophe.


In January 2010 the Chinese Academy of Social Sciences (CASS) showed what can happen to a country when girl babies don’t count. Within ten years, the academy said, one in five young men would be unable to find a bride because of the dearth of young women -- a figure unprecedented in a country at peace.

. . . So within ten years, China faces the prospect of having the equivalent of the whole young male population of America, or almost twice that of Europe’s three largest countries, with little prospect of marriage, untethered to a home of their own and without the stake in society that marriage and children provide.

. . .  As CASS says, “the gender imbalance has been growing wider year after year.”

Throughout human history, young men have been responsible for the vast preponderance of crime and violence—especially single men in countries where status and social acceptance depend on being married and having children, as it does in China and India. A rising population of frustrated single men spells trouble.

The crime rate has almost doubled in China during the past 20 years of rising sex ratios, with stories abounding of bride abduction, the trafficking of women, rape and prostitution.

. . . Over the next generation, many of the problems associated with sex selection will get worse. The social consequences will become more evident because the boys born in large numbers over the past decade will reach maturity then. Meanwhile, the practice of sex selection itself may spread because fertility rates are continuing to fall and ultrasound scanners reach throughout the developing world.