Welcome to the New Europe 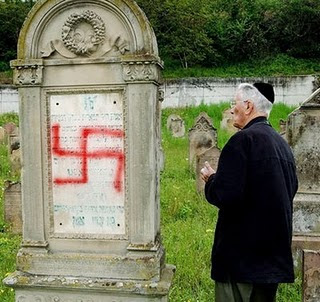 Jews are fleeing the Swedish city of Malmö.

Whatever else it might describe, the haunting phrase "the mystery of iniquity" has a special pertinence in the case of Antisemitism. What we might call Jewish exceptionalism in this regard is glaringly obvious. However ubiquitous are the forms of irrational hatred and prejudice, it is the Jews -- when they are available -- who have borne the special brunt of man's inhumanity to man. In this, our elders in biblical faith continue to be a tragic bellweather of resentment and rage. For when resentments begin to overwhelm the "restraining power" [katéchon, 1 Thessalonians 2:7] of laws and institutions, antisemitism creeps out of hiding and begins to toy with rhetorical feints designed to give it moral legitimacy.

Violent anti-Semitism has become increasingly commonplace in Sweden’s southern city of Malmö, leading many Jewish residents to leave out of fear for their safety. “Threats against Jews have increased steadily in Malmö in recent years and many young Jewish families are choosing to leave the city,” said Fredrik Sieradzki of the Jewish Community of Malmö. . . .

Jewish cemeteries and synagogues have been repeatedly defaced with anti-Semitic graffiti, and a chapel at another Jewish burial site in Malmö was firebombed last January during Operation Cast Lead in Gaza. . . .

In addition to its small community of roughly 700 Jews, Malmö is home to a growing Muslim population. However, local Jews insist that the majority of anti-Jewish sentiment, although certainly existent in the Muslim community, is coming from local Swedes.

Sieradzki says that the attitudes of Malmö politicians, especially Social Democrat city council chair Ilmar Reepalu, have allowed anti-Semitism to fester. “He’s demonstrated extreme ignorance when it comes to our problems,” Sieradzki explained. “It’s shameful and regrettable that such a powerful politician could be so ignorant about the threats we face.

Sieradzki admitted his pessimism about the future of the Jewish community in Malmö, saying that there needs to be a “complete change in attitude” among the city’s politicians if the situation is going to improve. “These issues need to be taken seriously,” he said, advocating for dialogue between politicians, Islamic groups and the Jewish community. “But right now many Jews in Malmö are really concerned about the situation here and don’t believe they have a future here.”

This is what the descent into a hellish chaos looks like in its early stages. Will the Europeans be able to turn from this abyss before it reaches the tipping point?