Weeping and Gnashing of Teeth . . .

NewsBusters has the latest ratings for the top three cable news networks, and it appears that viewers are abandoning the Pom-Pom outlets at an extraordinary speed. The hemorrhaging is greatest among the critical 25-54 year-old viewers. The explanation typically offered for this by the organizations and personalities who are losing viewers is -- more or less -- that people are too stupid to know what's good for them. But I'm not altogether sure that this explains the situation. 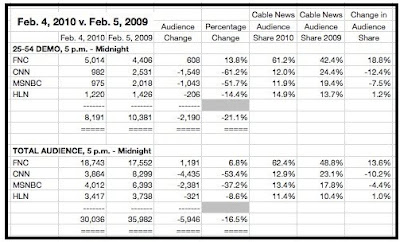 I'm constitutionally (if you'll forgive the use of that loaded term) wary of "popular movements." But so too am I wary of Pravda journalists who turn their backs on stories unflattering to the establishment they did so much to empower, stories which would have been trumpets to the heavens had they shown conservative politicians or movements in a bad light.

Does it comfort you for us to go out of the (Pom Pom press)frying pan and into the (Fox News) fire? Fox, news where fair and balanced takes on an entirely new meaning, is not any better than its shabby rivals. It is different, though. I doubt you would have much trouble finding a bunch of important stories Fox didn't cover. Going with "the enemy of my enemy is my friend" is shaky business sometimes. A pox on all commercial network news organizations. And public broadcasting is far from perfect.

Fox News is owned by News Corp, whose CEO is Rupert Murdoch. Murdoch is the largest shareholder. But--get this--the second largest shareholder is none other than Saudi Prince Alwaleed bin Talal, who owns a 7% stake in the company.

Just last weekend, Joseph Farah, publisher of the right-wing WorldNetDaily, pointed out that Alwaleed has succeeded in forcing Fox News to change its content, e.g., about the recent riots in Paris. He warned that foreign ownership of American media is "really dangerous."

During an interview last month, Alwaleed gave two reasons why he would like to influence American politics. The first is oil, as you might surmise, and the second is banking. He opposes financial reforms because he also owns a $4.3 billion dollar stake in Citigroup.

Now that the Supreme Court has decided to allow corporations to spend unlimited amounts in campaigns, Alwaleed will be free to spend millions--or even billions, if necessary--in opposing candidates who call for banking reform or action on climate change.

You can read more about Alwaleed and his influence at Fox News here.