Europe on Trial for Its Life 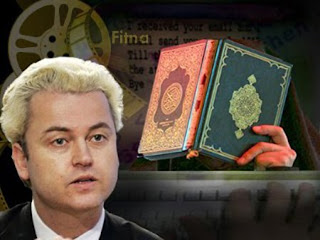 Geert Wilders quoting the Qur'an and the jihadists who cite it
as a mandate for violence against "infidels."

The Islamic scholar Robert Spencer, himself pilloried by the politically correct for speaking inconvenient truths, has this to say about the Amsterdam trial of the Dutch politician Geert Wilders:

It is not exaggerating to say that the Geert Wilders trial is a defining moment in the history of Western civilization. One would have to go back centuries to find a court case with as much significance for the future course of the free world. If the farrago of “hate” charges against Wilders stick, and he is convicted, it will herald the end of the freedom of speech in the West, as a precedent will have been set that other Western nations (urged on by the Organization of the Islamic Conference, which is the organization most responsible for the global assault on free speech) will be certain to follow. The era of enlightenment and the understanding that all human beings are endowed by their Creator with certain unalienable rights will be definitively drawing to a close, and a new darkness will descend over Europe and the free world in general. For once the precedent is established that a man can be jailed and destroyed for offending a privileged class, the idea that every human being has rights that cannot be infringed will be damaged beyond repair.

And even if Wilders prevails, enough damage has been done already. The Dutch law (and there are others like it in other Western countries) that stipulates that someone can actually be tried and jailed for offending another person will remain on the books. Other trials will follow. The law will be used by the governing elites who developed it in order to maintain their power and silence independent and dissenting voices.

Read Spencer's piece here.
Posted by Gil Bailie at 6:17 AM