My daughter Aña and I spent the afternoon together, and then I accompanied her to her obstetrics appointment. (She is in the first trimester of her first pregnancy.) Aña and her husband Mike had seen (barely) the baby's heartbeat two weeks ago, but today it was very clear. And so it was exciting for both of us. Again, here's the refrigerator art I brought home to put up next to photos of my other grandchildren: 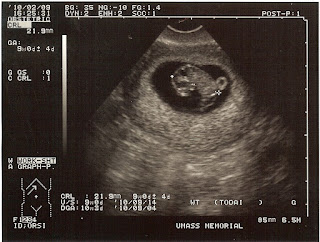 At lunch we had talked about some friends Aña knows who have succumbed to some of the less healthy cultural forces by which the young are today incessantly bombarded. On the way home, I pulled up behind a car with a "Proud to be the parent of an Eagle Scout" bumper sticker. It took me up short. When do you see bumper stickers like that anymore?

Thinking about the friends Aña had mentioned, and remembering how I, too, had been so duped in many ways by the cultural fashions of the late 60s and 70s, I felt great gratitude welling up in me for the ballast I had prior to the years of my ill-spent youth. I was no more prepared for the naive experiments of the 1960s than anyone else, but by the time I was being fully exposed to them I had been loved by a joyful and religiously devout family, I had received 12 years of Catholic education, I had been an Eagle Scout and a leader in the Scouting program, and I had a law degree.

It is no credit to me that even so weighty a ballast did not prevent me from being blown hither and yon on the currents of social contagion. But it was the memories and the formation that took place in those earlier years that eventually saved me and brought me (all too slowly perhaps) to my senses.

I hadn't thought about Boy Scouts or my Eagle Scout experience literally in years, but thanks to the bumper sticker I was reminded of it. And, wouldn't you know, when I got home I saw on the First Things website (here) Joe Carter's piece on the Boy Scouts. 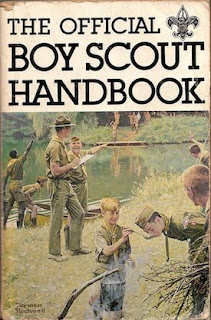 Cultural critic Paul Fussell once wrote that the Boy Scout Handbook is "among the very few remaining popular repositories of something like classical ethics, deriving from Aristotle and Cicero." Indeed, it is literally a vade mecum on virtue ethics. Consider, for example, the Scout oath:

On my honor I will do my best
To do my duty to God and my country
and to obey the Scout Law;
To help other people at all times;
To keep myself physically strong,
mentally awake, and morally straight.

Sir Baden-Powell, the founder of the Boy Scouts in Great Britain, wrote of his decision to make such a thing is lifework:

Thousands of boys and young men, pale, narrow-chested, hunched-up, miserable specimens, smoking endless cigarettes, numbers of them betting, all of them learning to be hysterical as they groan or cheer in panic unison with their neighbors — the worst sound of all being the hysterical scream of laughter that greets any little trip or fall of a player. One wonders whether this can be the same nation which had gained for itself the reputation of being a stolid, pipe-sucking manhood, unmoved by panic or excitement, and reliable in the tightest of places. Get the lads away from this — teach them to be manly.

This passage is strewn with things to make postmodern secularists wince, but I for one am deeply grateful for what Sir Baden-Powell's Boy Scouts did for me, and when I look around I see a world of young people who could benefit from something like it today. I can only hope that Aña and Mike's new baby will grow up in a world where such things are available.
Posted by Gil Bailie at 7:19 PM

Also, what would we have done without Norman Rockwell. What a beautiful cover to that handbook..