Deceit in service to Jihad 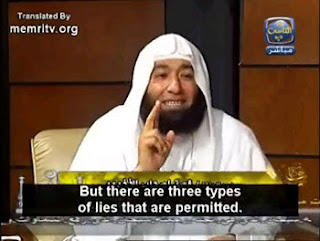 Islam must seem a paradoxical religion to non-Muslims. On the one hand, it is constantly being portrayed as the religion of peace; on the other, its adherents are responsible for the majority of terror attacks around the world. Apologists for Islam emphasize that it is a faith built upon high ethical standards; others stress that it is a religion of the law. Islam's dual notions of truth and falsehood further reveal its paradoxical nature: While the Qur'an is against believers deceiving other believers—for "surely God guides not him who is prodigal and a liar"[1]—deception directed at non-Muslims, generally known in Arabic as taqiyya, also has Qur'anic support and falls within the legal category of things that are permissible for Muslims.

So writes Raymond Ibrahim the associate director of the Middle East Forum.

Taqiyya offers two basic uses. The better known revolves around dissembling over one's religious identity when in fear of persecution. Such has been the historical usage of taqiyya among Shi'i communities whenever and wherever their Sunni rivals have outnumbered and thus threatened them. Conversely, Sunni Muslims, far from suffering persecution have, whenever capability allowed, waged jihad against the realm of unbelief; and it is here that they have deployed taqiyya—not as dissimulation but as active deceit. In fact, deceit, which is doctrinally grounded in Islam, is often depicted as being equal—sometimes superior—to other universal military virtues, such as courage, fortitude, or self-sacrifice.

The whole article is here. Ibrahim concludes with this:

Islamic law unambiguously splits the world into two perpetually warring halves—the Islamic world versus the non-Islamic—and holds it to be God's will for the former to subsume the latter. Yet if war with the infidel is a perpetual affair, if war is deceit, and if deeds are justified by intentions—any number of Muslims will naturally conclude that they have a divinely sanctioned right to deceive, so long as they believe their deception serves to aid Islam "until all chaos ceases, and all religion belongs to God." Such deception will further be seen as a means to an altruistic end. Muslim overtures for peace, dialogue, or even temporary truces must be seen in this light, evoking the practical observations of philosopher James Lorimer, uttered over a century ago: "So long as Islam endures, the reconciliation of its adherents, even with Jews and Christians, and still more with the rest of mankind, must continue to be an insoluble problem."

I would hope not insoluble, but certainly it will remain so as long as these aspects of Islam's worldview and religious teachings are ignored by those seeking dialogue.

The final word from Ibrahim:

In closing, whereas it may be more appropriate to talk of "war and peace" as natural corollaries in a Western context, when discussing Islam, it is more accurate to talk of "war and deceit." For, from an Islamic point of view, times of peace—that is, whenever Islam is significantly weaker than its infidel rivals—are times of feigned peace and pretense, in a word, taqiyya.