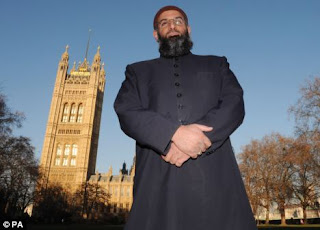 The British Daily Mail carried this story not long ago. I didn't pass it along, but as I get ready to leave the country for a few days -- during which I may not post much -- I figured I might as well pass this one along -- time-delayed:

The hate preacher organising a march of Islamic extremists through the streets of Wootton Bassett sparked outrage today by comparing British troops fighting in Afghanistan to Nazi stormtroopers.

As more than 210,000 people signed an internet petition objecting to the march, Anjem Choudary said he had chosen to protest in the town - renowned for honouring soldiers killed in Afghanistan - because it would attract 'maximum attention'. . .

Choudary said 500 of his radical group Islam4UK would carry 'symbolic coffins' in memory of the Muslim civilians 'murdered by merciless' coalition forces.

The firebrand cleric this morning tried to defend the march in an open letter published on his website, entitled 'To the families of British soldiers who have fallen'. 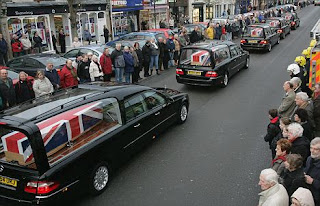 Try to imagine the reverse of this happening in any majority Muslim country in the world, however "moderate."

IMO, Gil, this would be a non-issue if Europe and the West still held to its vision. The Scimitar is, anthropologically speaking, an expression of what Girard calls the Sacred. It could not compete if it were faced with a culture engaged in what you have called the Holy Spirit's grand experiment, a culture born of the Church's Christian faith.

Instead, the vapid secularist void enervates us with demographic suicide and nihilism, an easy mark for a muscular Scimitar.

We must renew the vision of the biblical faith and ethos. Or else.