Chris Matthews, the Pom-Pom journalist famous for the tingle in his leg he experienced when listening to candidate Obama's eloquence, seemed just as enthralled by the State of the Union address. 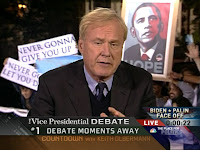 “…I was trying to think about who he was tonight. And, it’s interesting he is post-racial, by all appearances. You know I forgot he was black tonight for an hour. You know he’s gone a long way to become a leader of this country, and passed so much history in just a year a year or two. It’s something we don’t even think about. I was watching, I say, wait a minute, he’s an African-American guy in front of a bunch of other white people. And here he is President of the United States, and we’ve completely forgotten that tonight.”

It seems to me this is very telling. As we have seen, it is the "white guilt" liberals who are obsessed with race, and who so easily accuse their political opponents of racism. They are not nearly as post-racial as they seem to believe. I somehow managed to "completely forget" the color of Barack Obama's skin the moment he emerged on the national scene. I would eagerly and happily vote for a person of color in a heartbeat, provided I agreed with his or her political principles. But I would hope never to let the color of a person's skin determine my support.

Many of us were long ago able to look at Barack Obama without obsessing over the color of his skin, but Chris Matthews seems only recently to have acquired that ability, which explains a lot. So blinded by fashionable post-racial racial-bias were the doyens of elite liberalism that not even the emergence of the Rev. Jeremiah Wright story and others managed to interrupt their political catatonia.

We can safely say that we have become a post-racial society when we elect a person of color without the aid of either the reflexive and near universal support of those of the same ethnic or racial background or the liberal "white guilt" fixated on the skin color that it professes to have transcended. Which, under present circumstances, more or less means that we will be post-racial when we elect a pro-life conservative black man or woman. I hope it happens in my lifetime, and I'm beginning to think it might.
Posted by Gil Bailie at 10:08 AM