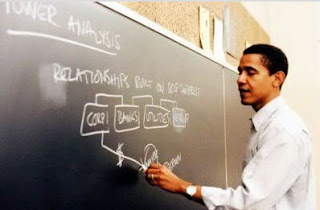 Robert Smith had a piece on the State of the Union speech which I share -- not I hasten to say -- vindictively, but rather for Smith's recognition of what several other writers have recognized. It is what those of us influenced by Girard would likely call "scapegoating," but which in the president's case is often simply conjuring a straw-man he can then rhetorically dispatch in order (he hopes) to turn his audience's dissatisfaction toward something other than his own political blunders.

As Girard often points out, scapegoating only works with all its original power in societies which don't have the concept of scapegoating. But ours does. So these political feints are far more recognizable for what they are.

And like any faltering Democratic pol, the president took the easier and lower road of bashing a bogeyman: financial institutions. . . .

There's nothing like inciting witch-burnings and stonings of bankers and investment execs to distract the public from the complete failure that the empty-suited Mr. Obama is. Appealing to people's primal appetites for revenge, resentment, and envy is, according to the time-honored formula, a sure way for the president and Democrats to move the heat from them to whatever handy victims they can find -- as in the past, doctors and pharmaceutical companies, but never parasitical trial attorneys. . . .

Mr. Obama may gain some quick traction and a modest bump from raising his club and landing it squarely on the heads of bankers and Wall-Streeters, but the benefit can't last. Why? Because it won't do a darned thing to put people back to work or give them the sense of security that their jobs are staying. Banker-bashing won't pay anyone's bills. Americans will end up seeing the president's shenanigans as a useless, if temporarily amusing, reprise of A Clockwork Orange, where delinquent youths vented their rage over their failings on the adults.

The reason this won't work is the same reason that these same ruses won't work when used by the political right: the Christian revelation of them -- while capable of being temporarily overridden by momentary political passions -- has crippled their power to produce sustainable forms of social solidarity.

One caution: when such things fail, they tend to rebound on those who resorted to them. As most know, and as my last blog post suggests, I have long been deeply skeptical of our current president's ideological bias, intellectual narrowness, inexperience, preening self-referentiality, and moral depth, but if his presidency implodes, we will need to turn our attention to fixing what's broken and not indulge ourselves in recriminations.

What I learned pretty well in my proximity and attentiveness to mimetic theory, Gil, is that bi-partisan politics as we experience it today is the diminished remnant but but no less direct heir of the sacred, as Girard explicates it.

Nobody has come close to our president in drawing our silly MSM's attention and fascination of a Tezcatlipoca; nobody points the accusing finger half so well and so often as he does.

But he is the leftist equivalent not of a god like Dionysus, but Pentheus: all-too human, proud, arrogant even, and (apparently) ignorant of the sacred forces he employs and which lend him his downwardly spiraling success.

The one thing that gives me a brief respite from the direction he has been leading the nation - an ostensibly "progressivist" but surreptitiously neo-pagan direction - is the decision to move the show-trial of Khalid Sheikh Mohammed from NYC. This shows that O does realize the source of his power - the crowd - rather than his divine (sic.) selfhood.

But even there I may be wrong. Enough - great post. Cheers

Rene Girard frequently reminded us that we in the modern world have become adept at recognizing scapegoating--but only when others are doing it. Our belief that we as individuals have progressed beyond scapegoating behavior is one of our most cherished illusions. We like nothing better than feeling morally superior to others, but cannot do so if we understand how much like them we are. We must insist on our "difference." They engage in scapegoating, and we do not.

We can garner sympathy from others by claiming scapegoat status--and why shouldn't we, if we are unjustly accused? The problem in everyday life is knowing whether the accused is actually guilty as charged, and so we have courts of law, investigative journalism, scientific inquiry, forensic analysis, etc. These allow us to establish some objective basis for determinations of guilt or innocence, and they may quell the mob.

When these objective measures fail to establish innocence for someone who has claimed victim status, then I think we are justified in saying that individual has "gamed the system." But, as a matter of principle, we shouldn't add the accusation of "gaming the system" to all the other accusations before objective determinations of guilt have been made. This is why I would not agree with your assessment of Khaled Sheik Mohammed. Let's let the legal system do its work and stop shouting for blood.

The obverse of this tendency to claim victim status (with or without justification) is the tendency that I see in your current post. This is the tendency to level against our opponents (without provision of evidence) one of the most damning accusations that can be made in this culture--that they are scapegoating someone. The object is to stoke our moral outrage before any process of reasoning can occur. But a moral and ethical trap awaits those who make these sorts of accusations prior to reasonable deliberation. And I think you can see what it is.

When we scapegoat others, I think we would like to imagine ourselves back in the world of the archaic sacred where no one will stand up to say, "But you are doing the same thing!" In those societies, there had to be total unanimity about the guilt of the victim. In our world, no such unanimity exists, and so we must be very careful.

I'll tell you, quite frankly, that your blog has seemed like some sort of "scapegoating central" to me over the years. But I'm trying not to frame this as an accusation, and I don't believe I've framed very many of my remarks that way over the years. This is because I believe it is mostly pointless to throw accusations of scapegoating around, because we all do it, we're all blinkered to our own scapegoating behavior, and the mutual exchange of accusations just leads to the sort of "all-against-all" mimetic crisis that Girard describes. It's much more productive to discuss the issues and try to determine if certain opinions and points of view have any merit, any rational basis, and then we can draw our own conclusions.

Two ways this plays out. One, he means it and he's even more inept than we ever imagined. Two, he knows that the only other viable site is Guantanamo, so by going forward with NYC he's forcing the Congress to shut down the funding and take responsibility for moving it the place Obama promised to close. But that's classic "Obama clever": it puffs him up for his liberal peers but makes him look even less competent to everyone else.

I think this is gonna be a bumpy ride.

Your general point is well stated and correct. We must be vigilant with ourselves, indeed.

But I question that this trial is a matter of “letting the legal system do it’s work,” nor making an “objective determination of guilt.” Obama has assured us the man will be convicted, has he not? And the Administration has made it clear that KSM will not be released if acquitted. The point of it is to let KSM’s defense team frame him as the representative of a class of victims, and the Bush administration as representative of a long historical procession of persecutors. The anticipated end convicts KSM for criminal acts for a righteous cause, and disgraces Bush as the embodiment of Western hegemony and violence. But in the end we are supposed to see that the darkness is over, Obama the lightbearer has arrived. In other words, it’s classic bad theater.