In his National Review Online article, Doug Bandow -- a senior fellow at the Cato Institute and a senior fellow in religious persecution at the Institute on Religion and Public Policy -- summarizes the state of religious freedom in the Islamic world today. His article should be required reading for every high school civics teacher in this country. (Do high schools still teach civics?) "More often than not," writes Bandow, "Islamic states violate basic human rights; and almost all persecute Christians, Jews, and other religious minorities."

The State Department refers to “state hostility toward minority or non-approved religious groups,” as if different faiths randomly oppressed different faiths. However, Islam has distinguished itself with the willingness of governments and individuals to harass, attack, jail, and kill members of other religions. Even the most moderate and tolerant Islamic states often fall far short of respecting religious minorities. In Morocco, for instance, the government detained converts from Islam to Christianity, expelled Christian missionaries, and restricted “non-Islamic materials and proselytizing.” Many other Islamic states are far worse, however.

AFGHANISTAN
The U.S. expelled the Taliban government, but has not created a free society. Although the Karzai government responded to outside pressure and took some steps to improve religious liberty, explains State, “the residual effects of years of jihad against the former Soviet Union, Taliban rule, civil strife, popular suspicion regarding outside influence of foreigners, and still weak democratic institutions hindered the realization of this aspiration.” Relations among different Muslim sects “continued to be difficult”; non-Muslims face “harassment and occasional violence”; “most local Christians did not publicly state their beliefs or gather openly to worship.”

BRUNEI
In this small Islamic state respect for religious liberty has been falling. The State Department reports that “non-Muslims were prohibited from receiving religious education in private religious schools, which had previously been allowed.” Moreover, “across denominational lines, non-Muslim religious leaders stated that they were subjected to undue influence and duress, and some were threatened with fines and/or imprisonment. Active monitoring of churches and disruption of supply shipments and mail were reported.” The authorities also limited the use of literature and worship places by religious minorities.

EGYPT
Although progress was made in some areas, “The status of respect for religious freedom by the government declined somewhat,” reports State, “based on the failure to investigate and prosecute perpetrators of increased incidents of sectarian violence,” mostly against Coptic Christians. Moreover, the authorities “again failed to redress laws and governmental practices that discriminate against Christians, effectively allowing their discriminatory effects and their modeling effect on society to become further entrenched.” Christian converts from Islam were harassed and abused.

INDONESIA
The most populous Islamic nation, Indonesia long has reflected a more moderate variant of Islam. But Muslim extremists remain active and often unconstrained by the authorities. Reports State: “Ongoing government restrictions, particularly among unrecognized religions and sects of the recognized religions considered ‘deviant’ were significant exceptions to respect for religious freedom.” Worse, the government sometimes “tolerated discrimination against and the abuse of religious groups by private actors and failed to punish perpetrators.” Those responsible are rarely punished. Moreover, “Some groups used violence and intimidation to forcibly shut at least nine churches and 12 Ahmadiyya mosques.”

IRAN
One of the uglier Islamic persecutors is Iran. The constitution nominally affirms the rights of “protected” religions — Christians, Jews, and Zoroastrians. However, in practice no non-Shi’a believer is safe. Explains the report: “Respect for religious freedom in the country continued to deteriorate. Government rhetoric and actions created a threatening atmosphere for nearly all non-Shi’a religious groups, most notably for Baha’is, as well as Sufi Muslims, evangelical Christians, and members of the Jewish community. Reports of government imprisonment, harassment, intimidation, and discrimination based on religious beliefs continued.” The state also promoted discrimination in the areas of education, employment, and housing. Iran is a Country of Particular Concern.

IRAQ
Tragically, liberating Iraq from Saddam Hussein meant liberating some of the worst sectarian passions, which he had brutally held in check. Roughly half of Iraq’s historical Christian community has been displaced, many to Jordan and Syria, another secular Arab dictatorship. Although the government does not persecute, reports State, “violence conducted by terrorists, extremists, and criminal gangs restricted the free exercise of religion and posed a significant threat to the country’s vulnerable religious minorities.” Although overall violence is down, Christians and other religious minorities continue to be targeted by radical Muslims.

MALAYSIA
This former British colony remains freer than Iran but not as free as Indonesia. Observes State: “Minority religious groups remained generally free to practice their beliefs; however, over the past several years, many have expressed concern that the civil court system has gradually ceded jurisdictional control to Sharia courts, particularly in areas of family law involving disputes between Muslims and non-Muslims.” Conversion from Islam is prohibited and, notes the department, “Religious minorities continued to face limitations on religious expression and alleged violations of property rights,” including prohibiting proselytizing of Muslims.

NIGERIA
The population is divided among Christian, Muslim, and traditional faiths. Although the national government does not persecute, a dozen “northern states use Sharia courts to adjudicate criminal and civil matters for Muslims,” notes State, and “local political actors stoked sectarian violence with impunity.” Although Christians are not free from all blame, the initiators more often have been Muslims and their victims more often have been Christians; there also have been reports of forced conversions to Islam as well as threats to extend Sharia law over non-Muslims.

SAUDI ARABIA
Another close U.S. ally, Saudi Arabia is among the globe’s worst persecutors. At least Saudi Arabia makes no pretense. Explains the report, “Freedom of religion is neither recognized nor protected under the law and is severely restricted in practice.” Although the private practice of non-Sunni Islam is usually left alone, “This right was not always respected in practice and is not defined in law.” Moreover, explains State, “the Commission for the Promotion of Virtue and Prevention of Vice (CPVPV) continued to conduct raids on private non-Muslim religious gatherings.” The repressive kingdom has been designated a Country of Particular Concern.

SOMALIA
No surprise, this wreckage of a nation with an Islamic majority is not a good host for religious minorities. Notes State: “The Transitional Federal Government (TFG) generally did not enforce legal protections of religious freedom.” Not that it probably could do so even if so inclined, given the rise in extremist militias, which “often imposed through violence a strict interpretation of Islam on communities under their control. There were also reports that individuals who do not practice Islam experienced discrimination, violence, and detention because of religious beliefs.”

SUDAN
This tragic nation, whose Muslim north long has warred against its animist and Christian south, also is inhospitable land for religious minorities. After years of violent conflict, an accord of sorts was reached, theoretically ensuring religious freedom in the south while favoring Islam in the north. State explains that, while the Government of National Unity “did not vigorously enforce its strictest restrictions on religious freedom, it generally did not respect religious plurality in the north.” There also “were some reports of societal abuses and discrimination based on religious affiliation, belief, or practice.” Sudan is another Country of Particular Concern.

TURKEY
Although the government generally respects freedom of religious practice, it restricts Islamic expression in education and official circumstances. Moreover, notes State, “Minority religious groups also faced difficulties in worshipping, registering with the Government, and training their followers,” as well as proselytizing. Further, “Threats against non-Muslims created an atmosphere of pressure and diminished freedom for some non-Muslim communities. Many Christians, Baha’is, and heterodox Muslims faced societal suspicion and mistrust, and some elements of society continued to express anti-Semitic sentiments.”

YEMEN
Yet another failed or semi-failed Islamic state, Yemen enshrines Islam as the state religion, holds Shari’a as the source of all law, bans conversion from Islam, and forbids proselytizing of Muslims. Although non-Muslims remain nominally free to otherwise practice their faiths, reports State, “There was a decrease in the status of respect for religious freedom by the government . . . , particularly with regard to the Baha’i and Jewish communities.” Private perpetrators of violence against religious minorities were not punished. 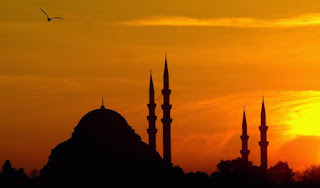