A journalistic scandal as well 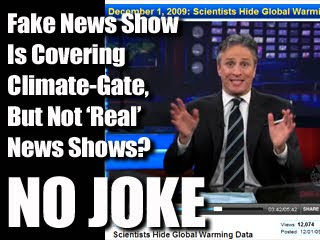 For more than a week after the story broke, ABC, CBS and NBC ignored or downplayed the scandal over a climate fraud and cover-up. Even Comedy Central scooped them. They have been gingerly playing some catch-up in the meantime, but there's still plenty of foot-dragging going on, as Jonah Goldberg of the National Review Online noted earlier:

How big a scandal this is for the scientific community is being hotly debated on the Internet. But in big newspapers and TV news, the story has gotten less attention. And that’s a scandal, too. The New York Times’s leading climate reporter, Andrew Revkin (whose name appears in some of the e-mails), won’t publish the contents of the e-mail on the grounds it would violate the scientists’ privacy. Can anyone imagine the Times being so prissy if such damning e-mails were from ExxonMobil, never mind Dick Cheney?

This is the lowest point in American journalism in my lifetime, with the very big exception of the new media, who have stepped in to fill the void.

On the same day Comcast announced it was buying a 51 percent stake in General Electric's NBC Universal, its CEO sent a letter to President Obama supporting the Senate's healthcare bill.

How's that for a nod and a wink? Could anyone miss it?

At virtually the same time, high-ranking Democrats in the House and Senate said Thursday [apparently with straight faces] they will closely scrutinize the proposed alliance to determine its impact on the media marketplace.

But . . . for a really insightful piece on this, read John Coleman's article here. Coleman is the founder of the Weather Channel and a veteran reporter. It's a great article.

Gil - this has been reported in the British news but not extensively. There seems to be a good reason for this. Until some sort of context is given to them almost all of it is speculation.

The quotes of the emails that seemed to me to be most suspect have proved with time to certainly not mean what the 'sceptics' side immediately assumed. When I read the 'hide the decline' 'trick' 'travesty' and 'there's not the warming there should be' 'the data must be wrong' I thought this is going to be hard to defend. However, 4 days later when I actually read the sequence of emails myself I realised that the common conclusions being lept to could not be right because: a) of the date of the email and b) the data (and where it was being collected from) that was being discussed.

Now it could turn out to that some of this stuff is incriminating for different reasons but at the moment all you have got is a load of conspiracy theorists who already believed in the most convoluted, conplex conspiracy ever finding some words that can be thought of negatively. If I spoke of a soccer player using 'tricks' I would not mean they were cheating.

All I know is that much of the vitriol is wrong so far. The computer code could be damning - I don't know - but I suspect that you are no more of an expert in this area than I am. If you are please explain what the problem is.

Speaking generally, coming to a firm conclusion before you have all the facts hardly suggests that finding the truth is high on some people's agenda.

Anonymous said...
This comment has been removed by a blog administrator.
11:03 AM

What I see when I read the various stolen emails and explanations posted at Realclimate.org is scientists acting as scientists--pursuing the truth. I can see no clear evidence that calls into question the scientific validity of the research done by the scientists victimized by the stolen emails. There is no sign of a conspiracy to alter data to fit a pre-conceived ideological view. Rather, I see dedicated scientists attempting to make the truth known in face of what is probably the world's most pervasive and best-funded disinformation campaign against science in history. Even if every bit of mud slung at these scientists were true, the body of scientific work supporting the theory of human-caused climate change—which spans hundreds of thousands of scientific papers written by tens of thousands of scientists in dozens of different scientific disciplines—is too vast to be budged by the flaws in the works of the three or four scientists being subject to the fiercest attacks.