The smallest and most innocent one counts. 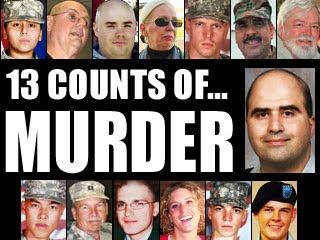 From United Americans for Life:

There are, of course, many unnamed victims of the attack at Fort Hood. Spouses, parents, children, siblings, friends. Each left to suffer and question why, on American soil, their loved one’s life was violently ended.

But there was another victim that has been frequently overlooked: the unborn child of soldier Francheska Velez. When Hasan took Velez’s life, he took the life of her unborn baby as well.

As the country looks for justice to be served in this horrendous tragedy, we cannot forget that Hasan can and should be charged with the death of Baby Velez as well.

The Uniform Code of Military Justice was modified when President George W. Bush signed the Unborn Victims of Violence Act (UBVV) in 2004. Also known as “Laci and Conner’s Law,” the federal UBVV law applies only to federal crimes and federal jurisdictions, such as military installations. ...

Because the UBVV law was signed in 2004 and is incorporated in the Uniform Code of Military Justice, justice can be sought for Baby Velez.

We can work toward the day when this law is replicated in every state, applicable to non-federal crimes.

The story is here.