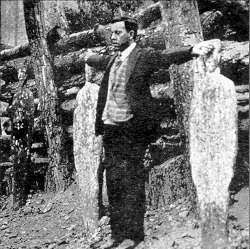 The President, a fiercely anti-Catholic Leftist named Plutarco Calles, famously blundered by publishing photographs of Pro’s execution to serve as a deterrent to potential adversaries. The photos were so instantly popular among Mexican Catholics that within a week of their publication by the government it had become illegal to possess one. [Catholic World News – Off the Record]

“If the powers of this world had only known , they would not have crucified the Lord of Glory.” (1 Cor. 2:8)

If the powers of the Mexican revolutionary regime had only known, they would not have crucified a disciple of the Lord of Glory.
Posted by Gil Bailie at 6:50 AM