No one risks his life for a question mark.

On this Veterans Day I remember my father, who died when I was months old (and before he had seen his newborn son) in the Battle of the Bulge in January of 1945. He and all those who went to Europe to preserve civilization had no utopian illusions about an eventual paradise on earth, but they had very clear ideas about the difference between civilization and barbarism. In his honor, I offer the following as a wide-angle lens on the issue raised in the post below.

In his treatise De Malo (about evil), Thomas Aquinas says this:

John Senior quotes this passage in a critique of late-modern liberal education. His remarks have application beyond the very real affliction from which the Western academy -- one of Christianity's greatest contributions to culture -- now suffers.

From the atheist precincts of Buchenwald, the Gulag Archipelago and the dark, satanic mills of the mass-murder of unborn children in the United States, the final solution to Western Civilization is its extermination. In the intellectual sphere this solution has been the dissolution of knowledge into its specialized departments, class discussions and committees, so that the teacher no longer takes his ideal from Aristotle as the master of those who know, but from Hamlet and Descartes, the masters of those who doubt -- who test, experiment and publish and never conclude but essai, whose "truth" is always in quotation marks, for whom the perfect unit of expression is not the sentence but the parenthesis. 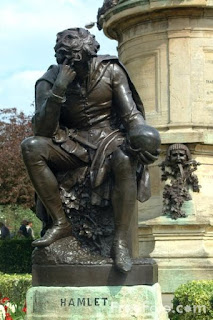 Gil, first of all, I would strongly disagree with the title of your post: “No one risks his life for a question mark.” To me, the question mark is a mark of liberty—the freedom to ask questions and to challenge authority. Civilization thrives on questions, while barbarism thrives on exclamation points. What we call “Western civilization” would not exist had no one ever questioned the teachings of Aristotle, Plato, Descartes, and the Bible. Western civilization did not end with St. Thomas Aquinas; the Enlightenment was a sign of its flourishing, not its decline.

Your quote from John Senior begins with these words:

From the atheist precincts of Buchenwald...

Wait a minute! Germany was overwhelmingly Catholic and Lutheran during the Nazi era. Tens of millions of German Christians were willing to do Hitler’s bidding and to follow him over the precipice if necessary. Those Germans staffing the concentrations camps were not atheist ideologues; they were ordinary Christians who took communion on Sundays and supported Hitler because he professed Christianity often enough to be believed, he was anti-communist and anti-Semitic, and he promised a return to traditional values even if that meant “cleansing” German society of “undesirables” like gypsies, homosexuals, and the mentally retarded. Nazi anti-Semitism was firmly grounded in Christian anti-Semitism.

In slipping the word “atheist” in before “precincts of Buchenwald,” Mr. Senior has tried a fast one, but it won’t pass inspection. Of course there were atheist influences in Hitler’s Germany, but they could not have brought those tens of millions of German Christians around to an extermination project if those German Christians had not already been fertile soil for such a plan. The suggestion that atheists were responsible for the Holocaust reminds me of the charge that some of the top Nazi officials were homosexuals and that these homosexuals somehow drove the agenda. My response to this is always, “What sexual orientation were all the other Nazi officials?” I will ask the same question about the respective roles of atheists and Christians in the Holocaust. What was the faith of all the millions of Germans who carried out Hitler’s orders?

I gather from what Mr. Senior has written that he rejects the Enlightenment, which gave us atheism, which, in his view, proposes extermination as the final solution to Western civilization. This idea is grandiose but preposterous, especially when we consider the influence of fundamentalist Christian apocalyptic scenarios that are all around us these days. (viz, the phenomenal sales of Tim LaHaye’s “Left Behind” series) It is no secret that Christian millennialists are doing everything in their power to hasten the Second Coming and the end of Western Civilization.

Modern secularism is hardly a threat to civilization, unless you define “civilization” so narrowly that it leaves no room for anything but Catholicism. Civilization, after all, is a product of many forces, not just of Catholicism, and one of the things that makes us civilized, when we are, is our ability to ask questions and challenge authority. The culture of Nazism was a notable lapse in this regard; it was, in fact, a lapse into barbarism. Slavish adherence to an authoritarian ideology usually leads to barbaric social conditions, even when it creates an apparently “stable” society.

Examples of the achievements of the Enlightenment are too numerous to mention, but here is a single example as a reminder: Modern biology, with all its offshoots in medicine and epidemiology, would not have been possible without the strong secularist influence of the Enlightenment. Remember this the next time you go in for a medical test or get your flu vaccine.

Senior’s nostalgia for the days of Aristotle is ludicrous. By discounting the bulk of Western history, Senior is doing exactly what he accuses atheists of doing. He is attempting to exterminate Western Civilization.

Maybe Senior could use some of that late-modern liberal education that you decry.