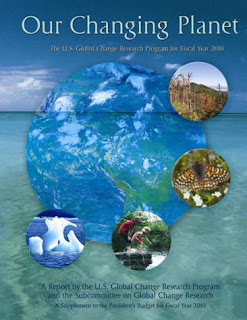 That is a shameless slogan, one which I hope will one day be as roundly mocked as it deserves to be. The clear implication of that statement is that those who speak it know that the cause they are committed to advancing cannot be successfully advanced in a democracy under normal circumstances because most people would oppose it. Under very extreme circumstances, however, under crisis circumstances, things would different, and their cause might well be able to be advanced. That is the kind of cynicism that is deadly to democracy. (If you think no one thinks like that, you may need to learn more about the current White House Chief of Staff and others in the current administration.)

Climate change isn't my issue, except when it spills over into nefarious plans to reduce the human population with the coercive power of the government. But as I said in response to a comment on an earlier blogpost -- which included a video clip of Lord Christopher Monckton critiquing the global warming claims -- I have long felt that the alarmists were repeating Paul Ehrlich's "population bomb" hysteria, which resulted in the demographic death of Europe as we know it, Roe v. Wade, and the great contemporary slaughter of the innocents. It was secular humanism becoming -- predictably -- anti-human. Though the global warming advocates bear an ideological predisposition for the earlier Malthusian nightmare, unlike that hysterical consensus, this one seems to be coming apart before too much long-term damage has been done.

Indeed, what is undoubtedly in the running for the greatest scientific swindle of the modern age is unraveling right under the noses of its votaries and acolytes and in plain view of the state-run media, but -- in a pattern that is now completely familiar -- the Pravda press has decided to ignore the story almost completely, the BBC today running this lede:

On exactly what will this ocean of cash be spent, one wonders? What Western commercial interest will be feeding at that particular trough?

Meanwhile those who have studied the motives and methods of the principle global warming promoters mince no words. The fraud perpetrated by the anthropogenic global warming ideologues, writes James Lewis, "would have cost the taxpayers of the world trillions of dollars, not to mention wrecking their economies with carbon taxes and penalties."

It was a massive, worldwide attempt at a coup d’etat, and the victims were going to include all the free and prosperous peoples of the world. Hitler had his Reichstag fire. Today’s transnational left had its global warming fraud. The political goal was exactly the same: maximum power through maximum fear.

All the manipulation, distortion and suppression revealed by these emails took place because it would seem these scientists knew their belief was not only correct but unchallengeable; and so when faced with evidence that showed it was false, they tried every which way to make the data fit the prior agenda. And those who questioned that agenda themselves had to be airbrushed out of the record, because to question it was simply impossible. Only AGW zealots get to decide, apparently, what science is. Truth is what fits their ideological agenda. Anything else is to be expunged. … [W]hat we are dealing with here is the totalitarian personality. One thing is now absolutely clear for all to see about the anthropogenic global warming scam: science this is not.

Their questionable techniques notwithstanding, if what seems to be the case turns out to be the case, the intrepid investigators who unearthed the extensive fraud should be given the ... dare I suggest it ... Nobel Peace Prize.
Posted by Gil Bailie at 4:52 PM

Great post, Gil.
This is the sword that He spoke about.

Climate change isn’t my issue, except when it spills over into nefarious [def: flagrantly wicked and impious] plans to reduce the human population with the coercive power of the government.

Nefarious? Coercive? I’m picking up the fear but not the facts. Is our government trying to coerce us into reducing our population? I’m well aware that Americans are dying unnecessarily because of war and lack of health care, but are there actually population-reduction policies in the works? Please clarify.

Have you looked at any of the numbers on world population? You may not be a “numbers” person, but if you are going to talk about population, then maybe it would be useful to consult the data. The following numbers may not impress you, but maybe they will impress some of your readers.

Nine billion. From 6.8 billion. That’s an increase of about 1000% since 1800, with about one-fourth of that increase occurring within a span of only 30 years. Read that sentence again. What do you think that might mean in the longer-term? One hundred years from now? Two hundred?

What we are seeing is a geometric progression in population growth. This is sometimes referred to as “exponential growth.” Each new person on this planet consumes staggering quantities of resources and—get this—the resources are not in a pattern of exponential growth. Guess what? They are being depleted at an alarming rate.

Our population growth has been on a collision course with Planet Earth since around 1800, when the population was at around one billion. One billion—less than one-sixth of the current figure—is the limit of sustainability. “Sustainability”—that means we might think we’re doing okay right now with our SUVs, our jet travel and our condos, but it’s not going to last. When the population of China starts wanting all these things, the rate of resource depletion will increase so rapidly that we’ll all understand the meaning of “civilizational collapse” for the first time.

So what do you propose doing about this?

Let me guess. You’ll just continue to deny it is happening, and you’ll seize on any little irregularity in the research to discredit all scientific research everywhere that reaches any conclusions at variance with your beliefs. But to deny the population statistics that I have just cited, you would have to be either delusional, an incorrigible ideologue, or a “professional” anthropogenic global warming (AGW) sceptic.

The “professional” AGW sceptics receive funding from foundations and other contributors who expect ROI (return on investment). Your partner Randy sits on the Education Committee of Imitatio (a foundation founded by Pay-Pal billionaire Peter Thiel). Am I getting close to home? Anyone interested in Peter Thiel can find a bonanza of information about him on Google. Of particular interest is the last sentence under “Life and Career” in the Wikipedia entry about him.

Hi Doughlas,
Thanks for proving all my points once again.
Oh Man! you had me laughing with the collision course with planet earth gag! I swear I could hear the movie soundtrack. I hadn't heard that one in over 30 years. Thanks for remembering.
See you in 30 years!

We live in extraordinary and baffling times. Millions of people who use the Internet, fly around the world in jets, and go in for open-heart surgery know next to nothing about science. Almost 20% of Americans believe that the Sun revolves around the earth. Nearly 40% believe that the earth was created less than 10,000 years ago. And as of last month, 64% believed that climate change was not caused by humans. (44% of these believed that global warming was a hoax.)

In terms of their understanding, these Americans are basically living in a pre-modern world in which the concept of evidence has not yet been introduced into public consciousness. The recent references to Descartes on this site are significant. I think some of our writers might find kindred souls living around the year 1600.

Since we know how to use the Internet, let’s use it. Do a search. Get some evidence from a reliable source. There is simply no excuse for the level of scientific ignorance that we’re seeing here, especially now when one only needs to spend a few minutes Googling.

Are our schools and colleges not teaching us how to distinguish good information from bad? Are we prepared to believe anything we’re told by people we trust, as long as it fits our prejudices? I think what we’re seeing here explains a lot of the anger that we’re hearing from atheists. They’re saying that people who believe in miracles and in the supernatural have no objective standards of truth and possess habits of mind that are dangerous to the rest of us because of the crises that our species is facing. We desperately need reality checks now and we can no longer afford to indulge ourselves in fantasies about the world and our place in it. We must be willing to look at ... evidence. And we must develop mental disciplines that insist on evidence whenever vague and unsubstantiated claims are made. Whether or not you believe in transubstantiation or the virgin birth is important only to the extent that it shows how you think about reality in general.

The secularists that you decry, Gil, are saying, “Let’s look at reality. Smoking is bad for your health. The earth orbits the sun. The earth is 7 billion years old. Homo sapiens sapiens evolved from primitive organisms. There were 1 billion people on our planet in 1800, and there are now 6.8 billion, expected to grow to 9 billion in the next 30 years. Polar ice is rapidly melting. The Chinese all want refrigerators. Sea levels are rising. The world’s forests are disappearing. Species are disappearing at an accelerating rate. These are all just facts. There is nothing arguable in any of this. So what do you make of all this? Do you have any way of processing this information, or are you still living in the year 1600?”

Funny thing--- the most glaring example of "Never let a goof crisis go to waste" was the governing axiom of Bush and Cheney in taking advantage of 9/11 to invade Iraq. They just couldn't belive their good luck. In this case the "experts" thought they were nuts and have been proven right- much to our nation's dreaful misfortune. It was a clear example of "maximum fear" for maximum power. It make the global warmers pale in comparison.

"..expected to grow to 9 billion in the next 30 years. Polar ice is rapidly melting. The Chinese all want refrigerators. Sea levels are rising. The world’s forests are disappearing. Species are disappearing at an accelerating rate."

"These are all just facts. There is nothing arguable in any of this. So what do you make of all this? Do you have any way of processing this information"