It can be done. 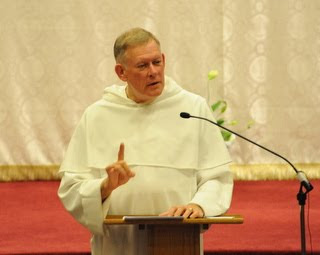 In a recent lecture in Alaska, my friend Fr. Michael Sweeney, O.P. made some remarks that deserve wide exposure. After detailing the lamentable decline of philosophical, theological and even moral guidance given in Catholic colleges and universities over the few decades, Fr. Sweeney says this:

What is a tiny Dominican graduate school of philosophy and theology to do about this situation? It is my conviction that we can accomplish a great deal. We have inherited, and remained faithful to, a tradition of study that was first articulated 750 years ago, with the only curriculum that was ever explicitly based upon the Church's preaching mission; there is an almost inexhaustible depth of resource open to us. Neither does the size of our school much concern me; every institution begins small, and we have good historical precedent for small Dominican faculties making a very great difference. One such example is that of the theology faculty of the University of Salamanca in the early 16th century.

The last great cultural upheaval of the West began, arguably, about five centuries ago. Consider what is afoot in Europe in the year 1500: a new “humanism” focuses upon the individual; the first stirrings of the Protestant reformation are already being felt; the nation states are beginning to take shape, first in France and then elsewhere in Europe; the discovery of the new world and its colonization begin, raising questions of international law and also of human rights (are the North American natives to be regarded as human?); the new-found wealth pouring into Europe causes an inflation of the currency not ever experienced before, and raises commercial and ethical questions concerning inflation, currency and interest.

In the midst of all this Francisco de Vitoria, O.P. assumed the chair of theology at the University of Salamanca where, with the assistance of his Dominican confreres, he began to apply the theology of St. Thomas Aquinas to the challenges of the day. Together they founded what history now knows as the “school of Salamanca”. This was not a school in the sense of a separate institution –they were professors at the University of Salamanca. Rather, it was a school of thought: a common intellectual and scholarly enterprise to address the questions of their day, an initiative that lasted for at least a century, and whose impact is still felt. They articulated the humanism that is integral to the tradition of St. Thomas; in economic theory they introduced the ideas of just price, supply and demand and the scarcity theory of value; they argued, successfully, for the rights of native peoples applying St. Thomas' discussion of the ius gentium and offered the world the first systematic articulation of human rights; they advanced the just war theory, and were the first in history to propound the idea of international law.

I hope that it will not be regarded as an utter lack in humility for me to assert that they accomplished all of this not merely as Dominicans, but because they were Dominicans; they applied their Dominican tradition to the challenges of their age and invented whole new areas of study.

Read his whole piece here.
Posted by Gil Bailie at 1:43 AM