Abortion is IN the Health Care Bill 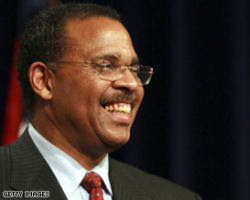 Ken Blackwell, the former U.S. Ambassador to the United Nations Human Rights Commission, is a senior fellow at the Family Research Council. Here's what he has to say about the Obama Administration's Health Care proposal:

His opposition to federal funding of abortion effectively ended Gore's quest for the White House twenty-one years ago.

Obama would make no such mistakes in his triumphal march to the Presidency. Now, as we enter the crucial weeks of the nation's long and drawn-out health care debate, we get confirmation that abortion is in the health care takeover plan.

No less a source than the reliably left-wing National Public Radio (NPR) confirmed federal funding of abortion for us. Julie Rovner explained that the reason the abortion issue has loomed so large in this year's health care debate is that "this time they're playing for keeps." All other abortion funding restrictions are annual amendments, Rovner pointed out on "Weekend Edition," but the Obamacare plan will become "permanent law." Both sides of the abortion debate, she reported, know that "there's a lot at stake here."

Read the whole article here.
Posted by Gil Bailie at 7:51 AM

Mr. Bailie,
Please forgive the OT. I'm in the middle of your book Violence Unveiled. Thought I would take a break from it for a minute and stumbled on this video:

Gil,
I just ran down the Stupak/Pitts Amendment. This one might actually make it through as it only allows funding for Abortion in the case of rape, incest or danger to the health or life of the mother. Its wording is much more precise than mine.

I pass this along for your consideration and those of your readers.
Ad Astra Per Aspera,
Kevin