I have on more than one occasion found myself using the phrase "above my pay grade" -- mostly in deference to the teachings of the Church and my entirely appropriate humility vis-a-vis the theological tradition over which the Church's Magisterium stands guard. But, alas, thanks to Barack Obama's response to a straightforward question about the moral status of the child in the womb, the phrase "above my pay grade" will now live in infamy for years to come. It may be a generation before the moral duplicity now attached to that phrase finally wears off and some future rhetorician can use it without embarrassment.

I apologize for the photograph that follows. But perhaps if Barack Obama took a long look at it, the moral status of the child in the womb would become something on which he might venture an opinion even at his current pay grade. 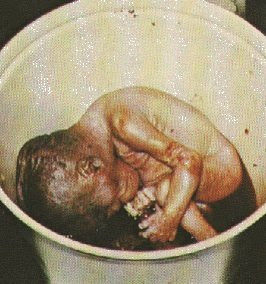