Sunset in the West 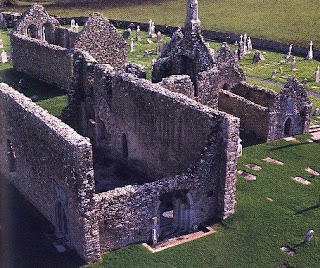 Back in the 1960s, one of the books that made the rounds was Loren Eiseley's "The Immense Journey." I must say that it left quite an impression on me, though I don't know what my reaction to it today would be. Eiseley had a poet's sensibility, which he applied to the task of narrating the story of evolution. I remember reading pages of the book in the San Gabriel mountains of southern California in the late 60s and being deeply moved by them.

After all these years, I still remember (vaguely but palpably) his description of the age of flowering plants, when suddenly the earth became colorful for the first time. Reading those passages in Eiseley's book was like watching a slow-motion film of the evolutionary process and seeing a sudden explosion of blue and yellow and red and purple. It was a miracle to behold it, even in the imagination.

I thought of that tonight as I read a quote from the 11th century historian and monk, Raoul Glaber, who wrote an often foreboding history of the tenth and early eleventh centuries. Of the year 1030, however, he wrote that "it seemed as if the world, shaking itself and casting off its old age, was putting on, here, there, and everywhere, the pure white robe of churches."

What Glaber was describing was the architectural manifestation of the Christianization and re-Christianization of Europe. Churches were springing up everywhere, and not little makeshift ones built in the full knowledge that the next wave of barbarians would destroy them. The 11th century churches were being built by people confident that they were providing for posterity, in this life and the next.

Most of those reading this right now would be able to finish this blog post without any help from me. Today the European skyline is taking a different shape. The cathedrals are still there of course, but they are largely empty, museums in all but name were it now for the fact that little congregations of the faithful continue to gather in them for the Eucharist and for worship. Gone, at least for the moment, is the historical confidence that raised the spires and lifted the spirits of Raoul Glaber in the 11th century.

History has a history, and history itself once took place in what, by today's standards, would seem slow motion. But recent history is speeding up, and now world-historical changes catch us by surprise. Whereas the transformation of which Glaber wrote in the 11th century occurred over a great expanse of time, today the religious landscape of Europe is being altered at an almost breathtaking pace, and this time it is Muslim minarets that are rising, announcing a new and deeply problematic future for the European continent and its children's children.

(I am still in Wyoming, a little patch of the West where what Glaber saw happening in the 11th century is happening again in the most remarkable and heartening way. Under the leadership of Bishop David Ricken, the Cheyenne diocese is alive with the most robust and healthy Christian revitalization. It's a privilege to be part of it, if only for a week. It is in places like this, largely unnoticed, where the seeds of a Christian reawakening are being planted and tended.)

First of all, I hope that the talks from the Wyoming gathering will be available.

If ever an expression of human construction exemplified the concretization of the primitive sacred in general and mimetic rivalry in particular, it is the mosque.

With no knowledge of mimetic theory but a profound knowledge of the deposit of faith, Hilaire Belloc wrote of the Institutes of John Calvin (Jean Cauvin): it provided an awful object of worship and ... it appealed at the same time to a powerful human appetite which Catholicism opposes. The novel object was an implacable God, the appetite was love of money. There was a dark instinct of horror which is found lurking or patent, in all antiquity and modern pagan ritual, a demand for victims and a prostration before dreadful power. Calvin provided victims. For his ardent disciples, remember, were elect. It was the others who were damned...

If that sounds like an apt description of a rapidly spreading religion today in Europe, so be it.