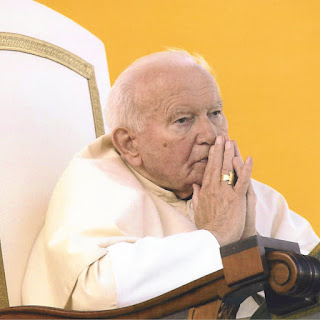 In John Paul II's Theology of the Body, his great contribution to the Church and the world, he made a most apposite distinction between emotion and excitement, the latter too often mistaking itself for the former. The great German theologian, Romano Guardini, makes essentially the same distinction but without the use of a verbal juxtaposition. In his great contribution to the world and the Church, his work on the liturgy, he writes:

The liturgy as a whole is not favorable to exuberance of feeling. Emotion glows in its depths, but it merely smolders, like the fiery heart of the volcano whose summit stands out clear and serene against the quiet sky. The liturgy is emotion, but it is emotion under the strictest control.

The record of liturgical banality to which most of us have been subject for the last few decades stands out all the more glaringly in the face of Guardini's reminder of the gravitas that is proper to liturgical life. It is easy to understand why Benedict XVI's great love for this gravitas is indebted to the early influence Guardini had on his understanding of the liturgy.

One thinks of Flannery O'Connor's quip to the effect that to be a Catholic is to be highly suspicious of one's emotional response to the sacraments.

The prayer of the church, Guardini writes: "awakens very profound and very tender emotions and impulses, but it leaves them hidden."