Abraham, the father of faith 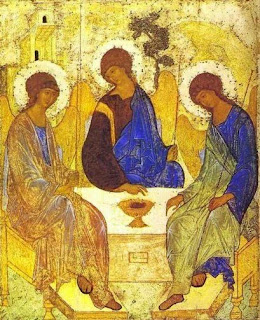 The first reading at Mass today was the story of the hospitality Abraham extended to the three strangers under the terebinth tree. The 15th century iconographer, Andre Rublev, used the story (as did others before him), to depict the mystery of the Trinity.

Far more than does the Roman Church, Eastern Church retains its devotion to the icon as a kind of visual sacrament. This icon hangs in my (our) home, and it never ceases to reward attention. As I have said many times in my talks on the Eucharist, Christ said, "Take this and eat it," he didn't say, "Take this and figure it out." Likewise, we could say of Rublev's depiction of the Trinitarian communio personarum, "Don't analyze it; just take a long, loving look at it."

As the German poet, Rilke, said at the conclusion of his poem, Archaic Torso of Apollo:

. . . there is no place on it
that does not see you. You must change your life.